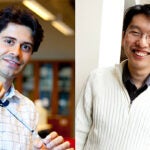 Lee L. Davenport, a pioneering radar physicist who has been credited for helping to bring an end to World War II, died on Sept. 30, of cancer in Greenwich, Conn.

From 1940 to the end of World War II, Davenport was a research fellow at the MIT Radiation Laboratory, developing the revolutionary anti-aircraft system — known as microwave radar, or Signal Corp Radio #584 — that helped save England from the V1 buzz bombs.

After the war Davenport received his doctorate for his design to remote control a missile over a radar beam. It was effectively the first guided missile, and mother of today’s drones.

From 1946 to 1950 Davenport served as research fellow at Harvard and coordinated the building of the University’s 92-inch cyclotron, which was then the second-largest atom smasher in the world. Davenport also taught physics at Radcliffe College during his time at Harvard.

Davenport later worked in private industry, becoming the chief scientist at GTE Laboratories before retiring in 1980.

A memorial service to celebrate the life of Lee Davenport will be held Oct. 22 at 2 p.m. at the First Congregational Church, 108 Sound Beach Ave., Old Greenwich, Conn.