Woods, yes, but as before, no 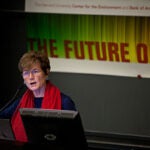 Weighing the risks of fracking

Though the transformation of farm fields into forests over the past century amounts to a New England conservation victory, a Harvard forest expert said Thursday that turning back the environmental clock and “restoring” pre-colonial woodlands is an impossible goal.

Peter Del Tredici, senior research scientist at Harvard’s Arnold Arboretum, said that New England’s forests grow differently from pre-colonial woodlands. They’re missing towering, iconic trees such as chestnuts and mature elms. They’re peppered with invasive species and decimated by introduced pests and diseases. They’re fragmented by ongoing human impact and still affected by past farming practices that altered the soil. Watersheds have been changed too, with dams built on rivers and streams.

Many of these changes are permanent, said Del Tredici. Some native trees, for example, can only grow in the natural, layered soil laid down over centuries by decomposing organic matter in the forest. These species, Del Tredici said, will never grow on farm fields even if they were there before the land was cleared because plowing churns the soil, disturbing its natural structure.

“Soil characteristics are radically different from undisturbed sites,” Del Tredici said. “Canadian hemlock will only be found on land that has never been plowed.”

Del Tredici spoke at the Geological Museum in a lecture sponsored by the Harvard Museum of Natural History. The talk, “Deeply Disturbed: The Emergent Forests of New England,” was part of a fall series marking the opening of the museum’s “New England Forests” exhibit in the Zofnass Family Gallery.

Disturbance will be a hallmark of the region’s future forests, Del Tredici said. While natural disturbance from hurricanes, tornadoes, and ice storms have always affected the region’s woods, humans have increased the pace of disturbance, clearing land for roads and for buildings, clearing tracts for logging, and introducing pests and disease.

While forests will regrow from some types of disturbance, such as logging, other types, such as road and home building, permanently fragment forests, increasing the ratio of edge zones to interior forest segments. These edges favor plants adapted to grow quickly and take advantage of disturbance. Many such plants are invasive species, favored by humans because they grow rapidly in fields, pots, and gardens. Once they escape into the wild, they can grow prolifically, gaining a toehold and then penetrating the forest interior.

The problem of invasive species occurs not just close to major urban centers like Boston, Del Tredici said. He showed pictures of Japanese knotweed, a species that thrives in disturbed areas, along a riverbank in Vermont. Following this year’s floods from Hurricane Irene, he said, there should be more disturbed places for the plant to take root.

Del Tredici recounted 11 major introductions of pests and diseases, including chestnut blight, which has reduced the former giant of the forest to a shrubby understory plant; Dutch elm disease, which cuts down another former forest giant after 20 or 30 years, before it’s fully grown; hemlock woolly adelgid, which has devastated stands of that tree; and the Asian longhorned beetle, whose recent arrival in Worcester has prompted the destruction of 30,000 trees so far.

In such disturbed areas, some species are winners and some losers. One major victor, Del Tredici said, is black birch, a fast-growing species that can take over disturbed plots rapidly. A study of forest composition comparing early colonial times and today shows declines in beech, hemlock, oak, and chestnut and increases in birch, maple, and pine.

Animal life within the forest is also different now. Though deer, beaver, and other species have rebounded, some, such as the wolf, haven’t, and others that were not here before, like the coyote, have come in their place. The absence of top predators has allowed deer populations to explode to levels likely never seen even in pre-colonial forests, Del Tredici said, resulting in overgrazing in some areas and exerting their own pressure on forest structure.

Though some observers may desire to restore forests to their original state, Del Tredici said that forests have always been changing. Even if researchers knew precisely the composition of forests when the first Europeans arrived, that picture should not be viewed as the description of a steady state that was disrupted by humans, but rather as a moment in time in forests that have always been changing.

Ongoing changes include climate warming that is pushing species like spruce and fir northward, and fewer killing frosts that provide protection from some pests, allowing species like the hemlock woolly adelgid to survive and spread. Introduced species like honeysuckle will continue to spread because the region’s animals view them as resources, not invaders. Birds, for example, feed on honeysuckle berries for food, spreading the seeds further.

“You may not like it, but that’s sort of irrelevant,” Del Tredici said. “Species that can take advantage of disturbance will be prevalent.”