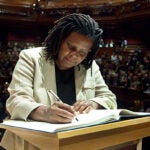 The French Consul of Boston, M. Christophe Guilhou, promoted Norman R. Shapiro ’51, a leading contemporary translator of French and professor in the Romance Languages and Literatures Department of Wesleyan University, to the rank of Officer of the Order of Arts and Letters of the French Republic on Oct. 18. The honor marks the achievement of a lifetime dedicated to translation and the spread of French culture.

The ceremony took place in the Lower Common Room of Adams House, a fitting location as Shapiro lived there as an undergraduate (he later completed a Ph.D. at Harvard too). “I spend a lot of time here in Adams House. This has been an affiliation that has spanned most of my life, ‘bookending’ it, much to my pleasure,” said Shapiro.

Today, he is very much a regular of Adams House, where he produces farces by Feydeau and other French writers, advises undergraduates in writing, and translates at his customary table during dinner.