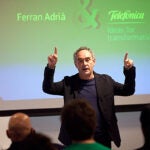 Beyond the kitchen, to the B-School

There are plenty of problems that the federal government should focus on fixing. But according to U.S. Rep. Barney Frank, D-Mass., stopping the sale and use of marijuana isn’t one of them. On Tuesday, Frank visited Harvard Law School (HLS) to make his case for legalizing the plant-based drug.

HLS students study dozens of instances where a federal law has conflicted with state statutes, a messy byproduct of the American legal system. Now, as more and more states are loosening their laws to allow for medical prescriptions for marijuana or for carrying small amounts of the drug for personal use, unevenly enforced federal laws against marijuana are even more outdated, Frank said.

Legalizing marijuana is one of very few “issues in America today where the voters are more enlightened than the elected officials,” said Frank, who was invited to campus by the HLS American Constitution Society, where he addressed a packed crowd of law students in Pound Hall.

“Just because the federal government can prosecute constitutionally people who use medical marijuana in accordance with state laws doesn’t mean they have to, or even that they should,” he said.

Previous administrations have varied in how strictly they prosecute the sale and possession of marijuana, he said, and Obama’s Justice Department has recently begun enforcing the law.

The problem, Frank said, is that the current federal law is not clear on whether there is any way for a person to obtain marijuana for medicinal use legally, even in states that allow it.

Frank and an unlikely ally, Rep. Ron Paul, R-Texas, recently co-sponsored two bills in the hopes of settling the issue once and for all. One would remove federal prohibition in states that allow medicinal marijuana, and a second, broader bill would remove all federal criminal penalties for possession and personal use.

“The fact is, the prohibition on marijuana does enormous amounts of harm, and no good that I can see,” Frank said.

Frank pointed out that allowing states to fully legalize marijuana would open up new sources of tax revenue, allow for regulation, and get rid of one incentive that marijuana producers and dealers currently enjoy.

“If you are in the business of selling marijuana, you are as tax-exempt as a church,” Frank said.

Frank made the case that reforming marijuana laws could also be viewed as a civil rights issue. Ambiguous laws are more likely to be applied unfairly, he said.

In New York, for example, carrying marijuana is only illegal if one displays it in public. Police who asked citizens to empty their pockets on the street — a practice disproportionately applied to minorities, Frank said — were forcing otherwise legal marijuana users to break the law.

Production and distribution should be left to states to regulate. “It is, after all, a federal repeal,” he said. “If the law passed tomorrow, the nonmedical use of marijuana would still be illegal almost everywhere in America.”

Frank said he doesn’t want to encourage marijuana use.

“Of course, in the free society that we live in, there are three categories,” he continued, which include “the whole rash of human activity which should be none of the government’s business.”

Marijuana, which causes neither socially disruptive behavior (like alcohol) nor physical addiction (like tobacco or narcotics), should fall safely into the third category, according to Frank.

“There’s a category, ‘drunk and disorderly’ — I don’t think there’s one for ‘baked and disorderly,’ ” he said to audience laughter. “I am not in charge of whether or not people act stupid or waste their time. … That’s a great freedom, to waste your time.”

Those who do want to discourage people from smoking marijuana would be better served by a good public health campaign aimed at getting users to quit. The tactic worked for anti-tobacco campaigns, he said.

“The public is aware that [the current marijuana policy is] enormously hypocritical,” Frank said. “A large number of people in our society have smoked marijuana and have suffered no ill effects from it, and knowing that are sympathetic toward it not being illegal.”

A Gallup poll released earlier this month showed that for the first time in the poll’s history, 50 percent of Americans were in favor of legalizing marijuana. (That figure is up from 46 percent a year ago.)
Still, Frank wasn’t hopeful that either of his bills would become law anytime soon. Rather, he said, he wants to create a space where his fellow lawmakers can feel safer politically talking about the medical benefits of marijuana, such as its ability to soothe pain in patients with chronic illnesses.

“I think if my colleagues [in Congress] knew what people really thought about this, things would change,” he said.