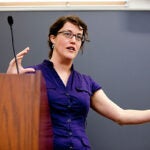 A child’s memory in military time

Every day, the government’s food stamp program buys Americans 20 million servings of soda, paying billions for a program that fosters the obesity that the government then has to pay again for in increased health care expenditures.

“That is arguably the single largest contributor to obesity,” said David Ludwig, a pediatrics professor at Harvard Medical School (HMS) and Harvard-affiliated Children’s Hospital Boston and professor of nutrition at the Harvard School of Public Health (HSPH). “It makes no sense … especially when we might wind up paying for that as a society in obesity and diabetes.”

The food stamp program was front and center on campus and on the Internet Thursday during a session of The Forum at Harvard School of Public Health, which regularly brings experts together to discuss important issues in the field. The session examined reforms needed in the federal government’s farm bill to improve public health. The farm bill, expected to come up for discussion in Congress in 2012, is the federal government’s major agriculture subsidy program.

Several panelists blamed U.S. agricultural policy over the past four decades for creating a food system where healthier fruits and vegetables are relatively expensive while high-starch, processed foods and red meats are cheap and widely available. The first farm bill was passed in the 1930s as a way to help the nation’s struggling agricultural sector, which at the time not only fed the country but, in a more rural America, also provided many jobs.

With ensuing technological changes in the years after World War II, the United States ramped up its subsidies, steering production toward what at the time was thought to be a healthy diet of starches and meat. Popkin said the program worked well, as illustrated by statistics showing the prices of those staples came down in the ensuing decades, while those left alone by government policy — fruits and vegetables — became more expensive.

“What is cheap today is what we made cheap. What we ignored, we made more expensive,” Popkin said.

The problem, Willett said, is that we now know that a healthy diet is not dominated by processed starches and red meat, but is just the opposite. A healthy diet is composed of whole grains, nuts, beans, fruits, and vegetables, with red meat in moderation and very little refined starches and added sugar. The result is that today two-thirds of Americans are overweight or even obese, diabetes is rising across the country, and in some parts of the country, life expectancy is actually dropping.

“If we judge by its impact on human health, the American food supply is a disaster,” Willett said. “We’re not using the levers we potentially have to make an impact.”

Williams, however, said it is wrong to blame the farmers for doing what was asked of them by the government. In addition, he said, there is a lot that is right with the American food supply, which made food plentiful and inexpensive.

Williams pointed out that subsidies to farmers make up just 15 percent of the farm bill’s expenditures and, given the nation’s budget problems, farmers are bracing to see those subsidies cut. The lion’s share of expenditures in the bill go toward providing food for America’s poor through what was formerly the food stamp program, and is now the Supplemental Nutrition Assistance Program (SNAP).

Panelists decried the lack of limits on the kinds of food that SNAP can fund, citing the U.S. Department of Agriculture’s rejection of New York City Mayor Michael Bloomberg’s request that purchase of sugar sweetened beverages be banned from the city’s SNAP program.

Panelists said there is an opportunity to change the incentives in the system to emphasize healthy eating, and they suggested separating the food assistance from the farm assistance portions of the bill in order to treat the two issues separately. They cited the federal government’s Women, Infants, and Children (WIC) program as a successful example of federal food aid. Poor mothers can get food assistance through WIC, but the program includes healthy foods, such as fruits and vegetables, along with nutritional education.

Other issues discussed by the panel include the school lunch program, whose menu was described by one panelist as largely junk food, and food marketing to children, a major focus of food manufacturers — and something Ludwig recommended banning. Ludwig told of seeing a 200-pound, 8-year-old girl in his clinical practice who was pre-diabetic and who insisted her mother buy food branded after iCarly, a popular children’s show.

“Busy working parents are undermined by this massive marketing campaign,” Ludwig said. “The industry knows that parents are going to cave.”