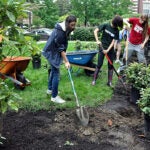 Dorothy Stoneman ’63 accepted the 2011 Robert Coles “Call of Service” award from the Phillips Brooks House Association (PBHA) Saturday at the Memorial Church. The award recognized Stoneman’s achievements in social entrepreneurship and public service as the founder and chief executive officer of YouthBuild USA, a national youth and community development program.

In introducing Stoneman, Gene Corbin, assistant dean of student life for public service, said, “When Dorothy Stoneman learned that Phillips Brooks House Association wanted to honor her with this award and to deliver this annual lecture, her first response was to ask if some of her youth in YouthBuild could join her in accepting it. In a world increasingly consumed with self-promotion, Dorothy’s focus continues to be on the development of others. Dorothy’s strident faith in the younger people and their ability to contribute to the communities in which they live has been a towering force that has literally transformed countless lives. In a time when we are wringing our hands over high unemployment and worrying about the futures of far too many marginalized youth, we would do well to recognize Dorothy Stoneman, and to learn all we can from her.”

Stoneman addressed an audience of students, alumni, parents, community leaders, and PBHA partners — including Robert Coles, for whom the award is named. Said Stoneman: “I have by some mysterious good fortune followed a path that has resulted in the creation of hundreds of oases in which low-income people, who expected to be dead or in jail by the time they were 25 years old, found everything they needed from caring and skillful adults so they can get their lives back on track and think of themselves as leaders and contributors in their community. And it has been an incredible joy to experience that.”

At YouthBuild, low-income individuals who have left high school without a diploma commit to at least one year of full-time training and community service. They spend half their time building affordable housing for homeless and low-income people in their neighborhoods, the other half at a YouthBuild community school, where they work toward completing their diploma.

Stoneman attributed the success of the program to its pillars of love, respect, and accountability.

“At YouthBuild, when they walk in the door, we treat them with so much respect,” she said. “We believe in the power of love to reverse the damage that’s been done by the oppressive forces of our society. And lo and behold, it works. It’s amazing how lively, how quickly, and how deeply it works. There are millions of young people who are temporarily lost. They’ve left high school without a diploma, they’re unemployed, they’re on the streets, they’re in prison, they’re sitting on the couches. But they are not dead and they are not dumb; they are still seeking life. If you want to break the cycle of poverty, give these 16- to 24-year-olds hope, opportunity, a pathway, support, love, and some pay for doing something of value for their community, and things will change.”

Furthermore, Stoneman says, young people’s participation in YouthBuild has a ripple effect throughout the community. “There’s nothing more exciting for these young kids than being seen in their neighborhoods, for the first time, as a positive force,” she said. “Now they’re heroes instead of hoodlums. For the first time, their parents and their grandparents are proud of them. Even their former gang members say that they’re proud of them for getting out. Not only are young people eager to seize these opportunities, but seasoned adults are also eager for a chance to vest their own lives in creating opportunity and hope for the young people in their neighborhood.”

PBHA is a student-led organization that engages more than 1,400 undergraduates at Harvard University in 85 student-led social service and social action programs in Boston and Cambridge. Every year, PBHA recognizes leaders in public service as a way to encourage its student participants to strengthen their leadership skills and pursue careers in public interest. Past recipients of the award include Al Gore, Marian Wright Edelman, U.S. Secretary of Education Arne Duncan, and social activist and educator Geoffrey Canada.