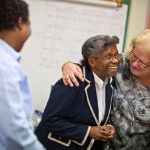 Graduate students celebrate having a central ‘place of our own’

Harvard’s Dudley House, the center of student life at the Graduate School of Arts and Sciences (GSAS), is also a home, complete with a mother, a father, a favorite aunt, a place to eat, and a place to play.

The Graduate Student Center at GSAS — its formal name — turns 20 years this month, so a house party is in order: a cocktail reception from 5 to 7 p.m. Thursday. President Drew Faust will be on hand.

The party will be in the Dudley Café, one of two restaurants in the House. (The other, tucked in the basement like a Beat-era coffee house, is Café Gato Rojo.)

Dudley is the first and oldest such House for graduate students in the Ivy League. “This is the Mother House,” said Dudley administrator Susan Zawalich. Yale’s McDougal Center is 14 years old. A similar graduate center at the University of Pennsylvania is even younger, and Columbia has one on the drawing board.

Before Dudley opened, Harvard graduate students had only their own departments to fall back on for community — or spent long, isolating hours in libraries or laboratories.

“Everyone needs a community; everyone needs a connection,” said Zawalich, who can fairly be described as the favorite aunt of Dudley House. Her third-floor office, which is complete with a sign that reads “Shambles,” is full of toys, dolls, stuffed animals, and zany hats. There is even a life-size cutout of Dr. Who.

“We call it the Office of Toy Therapy,” said Harvard Medical School biophysicist James M. Hogle. He and his wife, Doreen, a partner in a Concord law firm, are co-masters of Dudley — what you might call the mother and father in charge.

Hogle, who is the Edward S. Harkness Professor of Biological Chemistry and Molecular Pharmacology, looks like the dad. He has gray, mutton-chop whiskers and is burly and affable. “The building is Lehman Hall, but the spirit inside is Dudley House,” said Hogle. “We are relaxed about things. There’s a lot of laughter.”

He and his wife have a message for the nearly 4,000 pressed and pressured graduate students in 57 programs, departments, and divisions at GSAS: It’s OK to relax, and to pursue interests and friendships outside your disciplines.

GSAS — the only School at Harvard to offer the Ph.D. degree — embraces the interdisciplinary ethos that Dudley signifies. There are 16 interfaculty Ph.D. programs and 15 formal secondary fields for Ph.D. studies, a deliberate academic fusion of the sciences with the arts and humanities.

Dudley is “a showcase of scholarly diversity,” agreed GSAS Dean Allan M. Brandt. “But it’s also a place where the global diversity of our student body is fully expressed. GSAS is home to Harvard’s largest population of international students, and they come together at Dudley to share important cultural traditions.”

At Dudley House, fruitful collisions across academic boundaries happen informally. During mealtimes, the first-floor café is a stimulating bedlam of faculty, staff, and students.

Dudley House fellows, who total 25 to 30 a year, oversee an expansive set of programs, parties, and events. Graduate students can go on arts outings, take planned hikes, perform public service, sit in on a knitting group, join a language table, attend writing boot camps, put on a play, write for a literary magazine, or take in free films. Dudley’s affiliates can join intramural teams that compete with Harvard undergraduate Houses in crew. Or they can join the House jazz band, orchestra, chorus, or World Music Ensemble.

Brandt said Dudley “is really a microcosm of the broader opportunities — and the extraordinary resources — of Harvard itself.”

Hogle sees Dudley as “a welcoming place for students to be, to enrich their lives whenever they have time.”

At the beginning of each school year, there are nearly two weeks of dinners, parties, and other events open to new and returning students. One highlight event is Discover Dudley. This year’s theme was the Roaring ’20s. (Hogle showed up as Babe Ruth.) There also is a winter formal dance, a concert by Dudley’s music groups each spring, and an annual party at Commencement.

“A lot of what they need is here,” said Hogle. “We make a point about being knowledgeable about resources.”

Dudley Hall opened on Dunster Street in 1935 as a center for nonresident students. That building was razed to make room for the Holyoke Center, and operations moved to Lehman Hall in 1967.

In 1991, then-President Neil Rudenstine presided over the October opening ceremony for the graduate student center. Dudley was quickly “a tremendous meeting ground,” said Glenn R. Brody Magid, A.M. ’96, who was in the first cohort of Dudley fellows. “It was always a part of the texture of my experience.” Magid is now assistant dean of upperclass and concentration advising. His Holyoke Center office overlooks Lehman Hall. “I can swivel” in my chair, he said, “and see my origins.”

Discussions about a graduate student center started 75 years ago, said GSAS Administrative Dean Margot Gill. The first real attempt at a center came in 1950-51, she said, with the construction of the Harkness Center and its seven associated dormitories. The buildings were intended for GSAS graduate students, as well as students in law, design, education, and public administration. But by the late 1960s, said Gill, Harvard Law School assumed control of Harkness and five of the dormitories.

In the mid-1980s, then-GSAS Dean Sally Falk Moore and Administrative Dean John Fox revived the idea of a graduate center. “By 1989, the idea of Dudley House was beginning to take shape,” said Gill, and then-GSAS Dean Brendan Maher was soon close to an agreement between Harvard College and GSAS. The Graduate Student Council made a plea to President Derek Bok for “A Place of Our Own,” a sentiment memorialized on buttons.

By 1990, GSAS alumni had rallied behind the cause, said Gill, adding that some members of that committee “are still active and fiercely loyal.” One of them is Homer Hagedorn, A.M. ’51, Ph.D. ’55, a former grad student in history who now lives in Lexington. He’s been associated with the Harvard Graduate School Alumni Association Council since the 1970s, and was a chair of the group.

“It was worth yelling about,” said Hagedorn, who put an “A Place of Our Own” button on his academic gown one Commencement. “There was really nothing being done that provided any support to socializing among graduate students. Its time had come.”

Dudley House makes the GSAS experience different — open and welcoming, he said.  “It provides a social dimension to life that is not otherwise available to graduate students.”