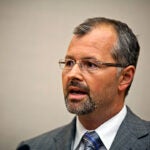 On the cusp of new transplant era

Huntington’s disease, a devastating genetic disorder that causes degeneration of nerve cells in the brain, affects more than 15,000 Americans, and at least 150,000 are at risk of developing the disease. There is no known cure or treatment for the disease — which starts with changes in mood, judgment, memory, and other cognitive functions and inevitably leads to increasing physical disability, dementia, and death.

In a new research paper published in the Proceedings of the National Academy of Sciences Early Edition online, Harvard-affiliated researchers identify a transcriptional biomarker that may assist in the monitoring of disease activity and in the evaluation of new medications.

The research, which is a collaboration between the laboratory of Clemens Scherzer in the Center for Neurologic Diseases at Brigham and Women’s Hospital (BWH) and the laboratory of Steven Hersch at the MassGeneral Institute for Neurodegenerative Disease at Massachusetts General Hospital (MGH),  describes the discovery and validation of a blood test that could be used to follow the activity of Huntington’s disease as well as the response patients might have to neuroprotective treatments.

“We know how to diagnose HD. What we don’t have, however, is a simple test to tell us whether the disease is active and progressing or responding to new medications. Such a test would be critical for making clinical trials more efficient. We are excited about the potential of our discovery,” said Scherzer, who is also an assistant professor of neurology at Harvard Medical School (HMS).  “The next challenge will be to develop this prototype biomarker into a test that is useful in drug trials.”

To begin to evaluate the potential role H2AFY may play in monitoring the effectiveness of neuroprotective therapies, the researchers conducted experiments using genetic mouse models of Huntington’s disease, which were also discovered to overexpress H2AFY.  They found that animals receiving the neuroprotective drug sodium phenylbutyrate for two weeks had reduced expression of that gene in key areas of the brain. The investigators also tested human blood samples from a multicenter phase 2 clinical trial of sodium phenylbutyrate conducted by Hersch and the Huntington Study Group and found that the expression of H2AFY was diminished in participants who received the drug.

“Our findings, taken along with previous research, suggest that Huntington’s disease progression and patient responses to some treatments could be measured by a blood test and that this biomarker gene, H2AFY, could help to facilitate research into the effectiveness of potential treatments for this disease,” said Hersch, who is also a professor of neurology at HMS.  “Even in very large studies lasting years, it is very difficult to use clinical measures to find evidence that a treatment might slow down Huntington’s disease. Biomarkers like H2AFY can help considerably.”

This research was funded through a program known as REVEAL-HD, which is supported by the National Institutes of Health/National Institute of Neurological Disorders and Stroke and is a unique multidisciplinary and multicollaborative biomarker discovery and validation project.