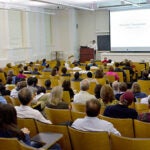 Isaac Dayno likes to get his hands dirty. The Harvard College freshman grew up in Vermont and sometimes longs to work on the land rather than at a desk in Widener Library. So when the Freshman Dean’s Office invited Dayno recently to participate in a campus beautification project — and to connect with classmates in the process — he jumped at the chance to get outside.

“Coming from rural Vermont, it was a way to experience something familiar in a foreign place,” he said. “I mulched and planted shrubs, bulbs, and other plants around the Union dorms and the Freshman Dean’s Office. I also cultivated new friendships and nurtured those that I had already begun. The project let me give back to the community around me and express pride in where I live.”

The landscaping project was part of a new push to get students invested in the campus community by inviting them to work together to make Harvard a better — and more attractive — place. Dayno and more than half a dozen other freshmen joined Dean Evelynn M. Hammonds, Freshman Dean Thomas A. Dingman, and members of the College’s operations staff on Oct. 1 to create two green spaces in the areas near Greenough and Hurlbut halls, part of the Union dorms cluster outside the Yard, and outside the dean’s office.

“When students graduate, they will have spent nearly a fifth of their lives at Harvard,” said Hammonds. “By enabling them to improve their local environment, projects like the one at the Union dorms give undergraduates a sense of ownership in the campus community and enable them to feel more at home here.”

At Greenough and Hurlbut, students and staff planted a sweet bay magnolia tree, itea and inkberry bushes, and scores of daffodil bulbs. Leonie Oostrom ’15, a Pennypacker Hall resident, said she got involved to brighten up the dorms outside of Harvard Yard.

“It was important to me living in a Union dorm,” she said. “I felt like we were lacking the beautiful outdoor space and sense of community that students living in the Yard have. Now there are gorgeous plants all around.”

The project was made possible by the advance work of the Yard operations staff. Manager Anthony Pacillo and his crew installed blue stone patios, cleaned up the work areas, and prepared beds for planting. When the plants were in, the staff installed benches donated by Hammonds’ office to give students a place to sit and enjoy their surroundings — and each other.

“The areas around Hurlbut and Greenough were underutilized,” Pacillo said. “Now there’s a beautiful lawn in the area outside” the dean’s office, “and benches for freshmen to sit on. They can read, study, or even play Frisbee. It’s much more student friendly.”

Dingman said there was also an important byproduct of the project. The benches and beautification give greater prominence to a memorial for Mack Davis, the beloved former assistant dean of the Faculty of Arts and Sciences, and one of the School’s first African-American administrators.

“Mack died suddenly and prematurely,” Dingman said. “It was a great tragedy. People who were touched by his life contributed to an engraved stone. No one was aware it was behind Greenough. His widow Shelly said that she was never able to find it. Now the memorial is very prominently displayed. People are already asking, ‘So, who was this Mack Davis?’ ”

Dayno agreed that the new gardens provide much-needed space for reflection and that the work was a welcome break from “memorizing art history slides or dates from the French Revolution.” He’s eager to get involved in the next project.

“The project was a perfect, down-to-earth way to meet and connect with the members of our community who do so much to make Harvard as special as it is,” he said. “I can’t wait to do it all again!”