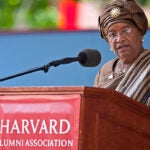 Recognized for work on change and the macroeconomy

Two alumni of Harvard’s Faculty of Arts and Sciences (FAS) won the Nobel Prize for economics Monday for their work on change and the macroeconomy.

In their award citation, the members of the academy listed some of the important questions that Sargent and Sims addressed in their research.

“How are GDP and inflation affected by a temporary increase in the interest rate or a tax cut?” they wrote. “What happens if a central bank makes a permanent change in its inflation target or a government modifies its objective for budgetary balance? This year’s laureates in economic sciences have developed methods for answering these and many other questions … ”