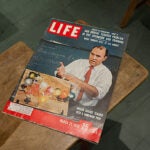 After leading a moment of silence in memory of the Red Sox’s disappointing season, Jill Lepore broke the quiet by picking a fight over the legacy of Hall of Fame infielder Honus Wagner.

“History is the art of making an argument by telling a story about dead people,” said Lepore, the David Woods Kemper ’41 Professor of American History in the Faculty of Arts and Sciences (FAS). “Here is my argument: [Wagner] was the greatest shortstop of all time. Anything social scientists say has to be proven with evidence.”

Lepore led off a murderers’ row lineup of six Harvard professors for “GenEd at Bat: A Discussion of America’s Favorite Pastime with the Faculty of Gen Ed” at Science Center A on Tuesday.

“Everything you need to know in life you can learn from baseball,” said Harris.

The heart of Harris’ order dealt with baseball’s connection to social and political issues.

Batting second, Robin Kelsey used a treasure trove of colorful slides from his baseball card collection — spanning the 1950s through the 1970s — to reveal parallels among portrait art, photography, pop art, and the game.

Kelsey, Shirley Carter Burden Professor of Photography and director of graduate studies in the History of Art and Architecture Department at Harvard, said cards captured the art of their time. Cards in the 1950s portrayed players against solid color backdrops like religious icons, while an early 1970s Jeff Burroughs (of the Texas Rangers) could be a Peter Max knock-off.

Yet, Kelsey, who received a Ph.D. in 2000 from Harvard’s Graduate School of Arts and Sciences (GSAS), said, they “were more real and inspiring than the people I interacted with day-to-day.”

Michael Klarman, Kirkland and Ellis Professor of Law at Harvard Law School, said baseball allowed African-Americans to shine even as they suffered stereotypes in the wider world.

“Baseball is a sport of individual achievement,” said Klarman, clad in a blue Red Sox cap and red-and-white Daisuke Matsuzaka jersey. “[You can] refute stereotypes with objective data.”

He also drew parallels between the black baseball vanguard and civil rights pioneers — both risked life and safety to win equality, said Klarman. Jackie Robinson, who broke baseball’s color barrier in 1947 for the Brooklyn Dodgers, was hit, deliberately spiked, and faced death threats.

Andrew Gordon, Lee and Juliet Folger Fund Professor of History and director of the Reischauer Institute of Japanese Studies, discussed cultural differences through the prism of Matsuzaka’s first-year struggles with the Sox.

Dice-K blamed his losing on yielding to a Sox request to alter rigorous workouts that he believed were uniquely Japanese. The Sox dismissed this excuse as “nonsense,” Gordon ’75, GSAS Ph.D. ’81, said.

To Gordon, author of “Matsuzaka’s Unknown Major League Revolution” about the pitcher’s rookie year, the answer is more complex. Decades ago, visiting Japanese ballplayers borrowed American spring training routines and transformed them to fit their culture.

“Cultures are not like billiard balls [hitting each other],” Gordon said. “They are dynamic and interactive; they are fluid and shifting.

Steve Levitsky, professor of government and a New York Mets fan, talked about the role of baseball in relations between the United States and Latin America.

“Baseball is a product of social and commercial ties,” Levitsky said. “America needs to strengthen ties. Baseball is one such tie.”

Donner Professor of Science John Huth deployed an array of props — a fan, a plastic globe, a Wiffle ball, and a leather whip — to demonstrate the physics behind the “magical moment between the time a ball leaves a pitcher’s hand and when it crosses the plate.”

A fastball relies on some basic physics, Huth said: fluid dynamics (the movement of air around an object) and the snap of a leather whip (low mass equals high velocity) to blow a batter away. The Magnus effect (lift and spin of an object) explains the curve of a curveball.

A knuckleballer’s trick is to get rid of spin, Huth said, by eliminating the whiplike arm motion and throwing the ball like a javelin.