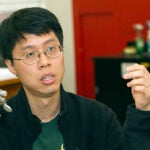 Harvard faculty inducted into American Academy of Arts and Sciences

Twenty Harvard professors are among 179 of the nation’s most influential artists, scientists, scholars, authors, and institutional leaders who were inducted into the American Academy of Arts and Sciences at an Oct. 1 ceremony in Cambridge.

Founded in 1780, the academy is one of the nation’s oldest and most prestigious learned societies, and an independent research center that draws from its members’ expertise to conduct studies in science and technology policy, global security, the humanities and culture, social policy, and education.

Annette Gordon-Reed, professor of law; Carol Pforzheimer Professor at the Radcliffe Institute; professor of history in the Faculty of Arts and Sciences