A magic wand for artists’ dreams 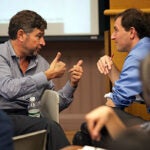 Ben Berman ’12 pushed the limits of computer animation. Megan O’Keefe ’11 worked with an Italian drama company for the mentally disabled. Julian Gewirtz ’13 delved into the depths of the AIDS epidemic with poetry.

The talented trio honed and expanded their creative sides over the summer with support from an ongoing Harvard program that encourages artistic exploration.

Each year, the Artist Development Fellowship (ADF) program of Harvard’s Office for the Arts (OFA), which is run with assistance from Harvard’s Office of Career Services, helps to nurture creativity among Harvard undergraduates. Awarded annually by the Council of the Arts, a standing committee of the Faculty of Arts and Sciences, the grants support projects in dance, literature, music, theater, studio art, film, mixed media, and multidisciplinary arts practices.

“The program is for students who have identified an extraordinary opportunity for artistic growth — whether it is apprenticing to a great theater director, investigating a new compositional form in music, or fusing different modes of art making in search of something uniquely expressive and new,” said OFA Director Jack Megan. The program offers grants that range from $1,000 to $5,000. During the 2010-11 year, the program distributed $41,000 to 13 recipients.

When O’Keefe came across an article in The New York Times last year describing an Italian theater company that combined her interests, she investigated. At Harvard, the English literature concentrator merged her passions, working with the Harvard-Radcliffe Dramatic Club and with Recreational Experience and Creativity with Harvard, a mentoring program that connects Harvard students with community children who have special needs.

With support from the OFA program, she spent the past summer in Rome with avant-garde director and performance artist Dario D’Ambrosi and his Pathological Theater, a nascent drama school for people with mental illness. There, she worked with students with Down syndrome and autism during an intensive puppetry workshop.

As she ponders her future of either working in theater production or in arts advocacy, O’Keefe said she will look to the example set by D’Ambrosi, who turned his love for theater and working with the disabled into a career. “What was amazing about this summer,” she said, “was getting to see how Dario was able to really take his time, find what his passion — his true interest — was, and to create a career that allowed him to embrace all sides of that.”

A history concentrator with a focus on 20th-century China, Gewirtz, publisher of  The Harvard Advocate, is also a gifted poet who has spent much of his time on campus honing his literary talents. Long fascinated with the scourge of AIDS as a “cultural and historical phenomenon,” and concerned that his own generation lacks a clear understanding of the epidemic and its repercussions, Gewirtz used the ADF to visit areas devastated by the disease.

He traveled to San Francisco’s Castro district, which was hard hit by AIDS in the 1980s and early ’90s. There he met with contemporary poet D.A. Powell, who has the disease, and others whose lives were forever changed by the illness.

Back at Harvard, Gewirtz is working on a series of poems informed by his experience. Using the framework of ancient Greek myths for some works, he captures emotions like fear, abandonment, and desire. The tale of Psyche involves a character who waits in the dark for her lover, the god Eros/Cupid, to come to her. But Gewirtz has worked it into a vehicle that represents the desolation of a patient stricken with disease and confined to bed, awaiting an uncertain future.

“I thought this would be the perfect way to give voice and find a persona for these poems … they would be finding a new cultural way to speak about the disease.”

The grant, Gewirtz said, provided him “the stamina of engaging with one large poetic project for a substantial amount of time,” and allowed him to explore a topic that is “part of understanding where we all are today.”

While many grant recipients take apprentice positions, working side by side with masters of their crafts, others, like Berman, exercise a more introspective approach, using the fellowships in large part for self-directed study.

His introduction to the creative Harvard program came by way of an older sibling and a trip to one of the most remote places on the planet. Just out of high school, he accompanied his brother Alex ’10, an ADF recipient, to Siberia in 2008. While there, they filmed an aboriginal group that used Soviet all-terrain vehicles to herd reindeer.

“I cannot say I am doing something quite as radical,” said Berman of his computer graphics project. But high-tech animators might disagree. With an innovative approach, the Visual and Environmental Studies concentrator used the summer months to work on a short film about an artificial intelligence that holds people’s online identities hostage.

Instead of sinking $60,000 into a “motion capture suit,” he improvised, creating his “eerie, surreal-looking robot” for an animated film. “In Warranty” uses what he calls an optical method of motion capture with a $150 camera and some “magic” software.

“This was a technical experiment that the fund really enabled … where I tried the bleeding-edge means of motion capture, and of modeling and rendering,” said Berman, who praised the fellowship program for allowing students to experiment.

“The fellowship gave me a way to challenge myself well beyond what conventional instruction has to offer … it gives prospective artists the opportunity to do something they might never, ever do again.”

The program’s organizers hope students will make good use of their experiences well beyond their Harvard years. Many do.

James Fuller ’10, now a dancer with Ballet Austin, used his fellowship to participate in a six-week intensive modern dance festival between his junior and senior years. The experience helped him land his current job.

The company’s director chose him in large part, said Fuller, because “I had had a very diverse background, with training in avant-garde and modern styles.” Today he still uses the training when performing contemporary works.

Calla Videt ’09, a young theater luminary who wrote, directed, and acted during her time at Harvard, took advantage of an ADF grant to travel to London after graduation to study with the theater company Complicite. The exposure to the small troupe, which operates like a “close-knit family,” altered her outlook.

“Seeing work created by this group of people in a company-oriented, family setting, inspired my approach when returning to New York,” said Videt, who now runs her own small company, SIGHTLINE, in New York City, modeled after Complicite.

The OFA-supported experience, she said, offered her critical “seeds of inspiration.”

“My hope is that years from now, some students will be practicing artists of one sort or another who will look back and say that Harvard and the Office for the Arts invested in them at a critical point in their development,” said the OFA’s Megan, “and that there was a real before-and-after effect of that investment.”