A Harvard perspective on military service 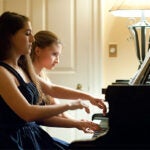 Is military service for you? Harvard undergraduates can now answer that question more easily. The Office of Career Services (OCS) just published “After Harvard: Considering Military Service,” its newest informational guide. The guide is another example of Harvard’s warming post-Vietnam relationship with the military, and comes the same year the University reinstated a campus office for the Reserve Officers’ Training Corps (ROTC), the first in 40 years.

One of the missions at Crimson Serves — which also has an alumni membership — is disseminating information. “After Harvard” includes a primer on each of the U.S. military services; on the multiple paths to becoming an officer; and on the benefits of service, from leadership training to home loans. The guide talks frankly about the morality of the military, its bureaucracy, and its many costs, including transient lifestyles and the risk of death or injury.

“This pamphlet is not recruiting material,” the authors say on the first page. “Rather, it is meant to be straight talk about military service.”

Nancy Saunders agreed. She is director of undergraduate career programming and advising at OCS. “We want to educate students about all of the options,” said Saunders of the new pamphlet. “We’re neutral. We’re like Switzerland.” But the new pamphlet, she added, “absolutely fills a void for us.”

“The fact that it’s on the wall next to the investment banking and consulting brochures,” said Wheeler, “gives this career path a level of visibility and a level of legitimacy I don’t think it had in the past.

The publication is unusual enough that it merits a publishing launch of sorts: a panel from 4 to 5 p.m. on Friday (Oct. 28) at the OCS office at 54 Dunster St. “Military Matriculation: Is Military Service for You?” is co-sponsored by the Institute of Politics at the Harvard Kennedy School.

“It’s a tangible event to celebrate much more than the panel and the publication,” said Wheeler, referring to ROTC’s renewed, “monumental” presence on campus.

The panelists — three men and a woman — are veterans of the Air Force, Marine Corps, and Navy. Three are current Harvard graduate students.

“We understand the unique pressures of Harvard,” said Wheeler, who will moderate the panel. He served three years as an Army officer specializing in Patriot missile systems.

Inspiration for the advisory guide came in part from Wheeler’s experience at Harvard College. He was a freshman when the 9/11 terror attacks happened, and their enormity grew on him over four years. He said of the military, “I came to believe it was the next right step for me.”

But ways to get advice about the service were somewhat limited. He talked with the veterans he could find at Harvard, and to recruiters in Boston. A pamphlet — detailed, neutral, and explicit to the Harvard experience — would have helped.

“For the right person coming out of Harvard, the military can be the perfect next step,” said Wheeler, whose tours of duty included South Korea, Italy, and Puerto Rico. “There are skills you’re not going to build anywhere else.”

At Harvard Business School, for example, “the military guys and gals oftentimes bring the most powerful and salient comments to the discussion,” said Wheeler. “They give a dose of reality about what leadership really requires.”

He called the new pamphlet a “conversation starter” that will give curious undergraduates a point of contact for advice about the armed services.