A chance at an Ivy title 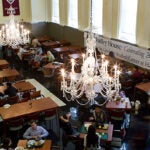 Women’s soccer team rebounds from being down

On a perfectly crisp fall afternoon, Harvard women’s soccer coach Ray Leone orders the players to perform drills across the bright Astroturf. They’ve already scrimmaged. And once they get the drills right, Leone will order a quick 10-minute game to round out practice.

He’s pushing them hard, but he has to. There have been quite a few ups and downs this season, according to Leone. “Emotional games, crazy games,” he mused. “We’ve had a lot of crazy games.”

During a Sept. 16 game against Hofstra University, the Crimson were down 5-2, but rallied to score two goals to tie the contest with a minute to go, only to end up losing, 5-4. “You don’t see that very much in soccer,” said Leone.

Now on an upswing with a streak of seven wins and a tie, including victories over Brown University, Siena College, and most recently, Princeton University on Oct. 22, the Crimson are closing in on the season’s end, and have a chance to clinch the Ivy League championship if they beat Dartmouth College and Columbia University in the last two games on Oct. 29 and Nov. 5.

In a Sept. 9 game against the University of Massachusetts, with less than two minutes to play, Baskind broke a 1-1 tie and ensured a last-minute victory for the Crimson. The team battled into double overtime against Cornell on Oct. 8, but couldn’t muster a goal and ended tied 2-2. In another double-overtime game against the University of Rhode Island, with seven minutes left, the ball sailed above Crimson goalie Bethany Kanten ’15 to give URI the win, 3-2.

Co-captain Lindsey Kowal ’12 credits the team’s comebacks to its fighting spirit. “We always find the drive to win,” she said. “We haven’t yet hit our stride as a team, but we’re all on the same page in terms of what we want to achieve.”

Now with a 10-4-1 record, and those two games ahead, Harvard “has a small room for error,” said Kowal.

“This is definitely a resilient team, but we have to keep improving. Everybody’s still got a shot in the hunt for the Ivy title. Nothing’s decided yet,” said Leone. “These are defining moments of our team. The success, and the heartache.”