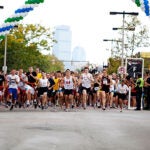 Huddled beneath the covered section of Harvard Stadium with his wife and twin 10-year-old daughters, Dave Horan managed to stay dry while cheering on the Crimson Friday night. For the National Security Fellow at the Harvard Kennedy School, the game represented not only an opportunity to take his girls to their first collegiate football game, but also a chance to tap into the spirit of his new school. “It’s a new experience for us,” he said. “We wanted to get the Harvard juice, as they say.”

On this night, at least, that Harvard juice was a concentrated form of defensive might. Harvard, with just four seniors on the starting defense, forced five turnovers against Ivy foe Brown, including two interceptions, a touchback, and a recovered fumble on the Crimson’s own 1-yard line. All told, the home team’s deluge of big stops was an apropos performance for a crowd of nearly 19,000 sheltered by umbrellas.

“We always talk about, at the beginning of the year, [how] we have to develop an identity as a team and tonight I think we developed an identity,” said coach Tim Murphy. “And that is, we’re a tough, physical team. We have a lot of things we have to work on, we made a lot of mistakes … but the bottom line is the kids just played so hard. If you play that hard, and you can force some turnovers, you get a chance to be in every single game.”

It’s a tough point to argue — and one that reveals how the great sports intangible of “hustle” can translate into real results. After all, a glance at key stats — first downs (Brown’s 19 to Harvard’s 20); total offensive plays (75 and 73 for Brown and Harvard, respectively); total offensive yards (Harvard outpaced the hosts by a mere 14 yards with 366 on the night); and penalties (both squads committed half a dozen) — suggests a close game. But the difference, again, was the toughness, physicality, stubbornness — call it what you will — of the Crimson defense.

Take, for instance, Brown’s six-play march deep into Harvard territory early in the second quarter. Trailing 14-0, the Bears appeared poised to get on the board, until senior free safety Dan Minamide picked off a pass in the end zone to return possession to the Crimson, thwarting the Bears’ bid for a first-half score. More than that, the touchback set the tone for the remainder of the game. Indeed, the second half saw the Crimson collect a pair of interceptions and recover a second fumble.

If Murphy is thrilled with the team’s 2011 identity, one imagines the longtime coach (now in his 18th season), is equally happy with his backup QB. With starter Collier Winters sidelined by hamstring discomfort, junior Colton Chapple capably managed the offense, throwing for 207 yards and two touchdowns, including a 20-yard laser to sophomore Cameron Brate and a long bomb to senior Adam Chrissis. That latter score — at the 6:39 mark of the final period — preceded a 31-yard field goal by sophomore David Mothander to set up the 24-7 final.

For Chapple, his first start felt pretty good: “This is a kid’s dream. Playing in front of 20,000 people under the lights with his teammates that he’s been working with all summer. I felt like I didn’t have to win the game. I had to manage the game and had to put us in a place to win.”

Harvard will return to action on Oct. 1 with a visit to Easton, Pa., to take on Lafayette. The Leopards (1-3) will play host for the first time this season. Visit gocrimson.com on game day for stats, news, and updates.

Football in the rain