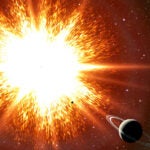 When old stars slow down

Among the many ways that participation in Alcoholics Anonymous (AA) helps its members stay sober, two appear to be most important — spending more time with individuals who support efforts toward sobriety and increased confidence in the ability to maintain abstinence in social situations. In a paper that will appear in the journal Addiction and has been released online, researchers report the first study to examine the relative importance to successful recovery of the behavior changes associated with participation in AA.

“AA is the most commonly sought source of help for alcohol addiction and alcohol-related problems in the United States and has been shown to help people attain and maintain long-term recovery,” says study leader John F. Kelly, associate director of the Massachusetts General Hospital (MGH) Center for Addiction Medicine, a Harvard affiliate. “This study is the first to investigate exactly how AA helps individuals recover by examining the independent effects of several mechanisms simultaneously.”

Kelly is an associate professor in the Harvard Medical School Department of Psychiatry.

In 1990, the current report’s authors note, the Institute of Medicine called for more research into exactly how AA helps its members. While subsequent studies have documented the short- and long-term benefits of AA participation, only recently have researchers investigated how those benefits are conferred. A broad range of factors associated with AA participation have been identified as contributing to recovery including changes in social networks, maintaining motivation, confidence in the ability to cope with the demands of recovery, decreased depression symptoms, and increased spirituality — but no study as yet has been able to determine the relative importance of those mechanisms.

To meet that goal, the current study analyzed data from more than 1,700 study participants who had been enrolled at nine U.S. centers as part of a federally funded trial known as Project MATCH that compared three alcohol treatment approaches. Almost 1,000 were recruited into the study directly from the community, and another 775 had received prior inpatient treatment, indicating a greater degree of alcohol dependence. Along with the treatment approaches being tested in Project MATCH — cognitive behavioral therapy, motivational enhancement therapy, and a 12-step therapy — participants were free to attend AA meetings.

At follow-up sessions three, nine, and 15 months after completing the Project MATCH therapies, participants received several assessments. In addition to reporting their alcohol consumption — based on both the frequency and the intensity of recent drinking — attendance at AA meetings, and spiritual and religious practices, they also completed specialized assessments of confidence in their ability to remain abstinent in social situations and when experiencing unpleasant emotions, of their level of depression symptoms, and of whether their close social ties supported or discouraged their efforts to maintain abstinence.

Overall results indicated that greater participation in AA during the first three months of the study period was independently associated with more successful recovery over the following year. Of the behavioral changes associated with AA attendance, changes in social networks — more contacts with people who supported abstinence and fewer with those who would encourage drinking — and greater confidence in the ability to maintain sobriety in social situations were most strongly connected with recovery success. Reduced depression and increased spirituality or religious practices also had a significant independent role in the recovery of participants who had received inpatient treatment and probably had been more seriously dependent on alcohol.

“Our findings are shedding light on how AA helps people recover from addiction over time,” says Kelly. “The results suggest that social context factors are key; the people who associate with individuals attempting to begin recovery can be crucial to their likelihood of success. AA appears adept at facilitating and supporting those social changes. Further questions we need to investigate are whether particular groups of individuals — women or men, young or old people, those with or without accompanying psychiatric disorders — benefit from AA in the same or in different ways.”