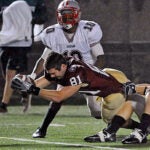 Harvard University granted its highest honor for faculty members today to a scholar who has shown that sustainability can boost the bottom line and to a pioneer in stem cell research.

Rebecca M. Henderson of the Harvard Business School (HBS) and Douglas Melton of the Faculty of Arts and Sciences (FAS) and the Harvard Medical School (HMS) were named University Professors in recognition of their dedication to teaching and groundbreaking scholarship that crosses academic boundaries.

“The University Professorships were established almost 80 years ago as a special way to recognize individuals of distinction who are working on the frontiers of knowledge in ways that cross the traditional boundaries of academic disciplines,” said President Drew Faust. “In the lab and in the field, as well as in the classroom, Professors Henderson and Melton have provided superior examples of the work of the Harvard faculty.”

Melton, the Thomas Dudley Cabot Professor of the Natural Sciences and a co-chair of both the Department of Stem Cell and Regenerative Biology (SCRB) and the Harvard Stem Cell Institute, has been a driving force behind the University’s ascendency in stem cell research. Along with his wife, Gail, he is also the Co-Master of Eliot House.

“While the world knows Doug Melton as a scientist who has played a seminal role in the exponential growth of the new field of stem cell science, we at Harvard also know him as an untiring mentor to scientific leaders of tomorrow, and as an academic who is passionate about improving undergraduate education,” Faust said.

Melton becomes the Xander University Professor. Melton initially established himself as a researcher by bringing the tools of molecular biology to bear on the field of developmental biology in frogs, but he switched his focus to the infant field of stem cell biology and regenerative medicine when his young son was diagnosed with type I diabetes. Since then, Melton has dedicated his career to using stem cell biology to search for a cure for diabetes, which was also diagnosed in his daughter.

In 2004 with David Scadden, HMS’s Gerald and Darlene Jordan Professor of Medicine, Melton launched the Harvard Stem Cell Institute, which today boasts more than 80 principal investigators, and more than 800 scientists, scattered across the science departments, Schools, and affiliated hospitals at Harvard. Such a collaborative, interdisciplinary effort would have been unthinkable when Melton came to Harvard in 1981, after undergraduate studies at the University of Illinois and earning a Ph.D. as a Marshall Scholar in molecular biology at Cambridge University in England.

Three years ago, Melton and Scadden were named co-chairs of SCRB, Harvard’s first inter-School department. Based in both the FAS and HMS, the department has launched an undergraduate concentration in regenerative biology, introducing a new generation of students to the possibilities of stem cell science.

“This is a tremendous honor, for which I am very grateful. There are a number of great research institutions with outstanding scientists,” he said. “But what sets Harvard apart is the quality of its students, undergraduates, graduate students, and postdoctoral fellows. I especially enjoy teaching undergraduates because of their almost palpable desire not only to learn, but also to expand the frontiers of learning.”

Henderson, the Senator John Heinz Professor of Environmental Management at HBS who also holds a joint appointment in the General Management and Strategy units, focuses her work on how organizations respond to large-scale technological shifts, most recently in regard to energy and the environment.

“Rebecca Henderson was one of the first to recognize that profits and sustainability are not mutually exclusive, and that there are growth opportunities for companies that are committed to reducing their environmental footprints,” Faust said. “Hers is a leading voice on the environmental challenges of our time.”

Henderson becomes the John and Natty McArthur University Professor, a chair established in honor of the former HBS dean and his wife. Henderson’s career has long explored the organizational and strategic issues that well-established companies face in responding to significant technological and competitive shifts. But her recent research focuses particularly on the ways in which environmental crises present both challenges and opportunities for the private sector.

Henderson received an undergraduate degree in mechanical engineering from the Massachusetts Institute of Technology in 1981 and a doctorate in business economics from Harvard in 1988. From 1998 to 2009, she was the Eastman Kodak Professor of Management at the Sloan School of Management at the Massachusetts Institute of Technology, where she taught courses in strategy, technology strategy, and sustainability. She joined HBS in 2009. She teaches leadership and corporate accountability and the field study seminar “Building Green Businesses” in the M.B.A. Program. She is also a research fellow at the National Bureau of Economic Research. Together with her colleague Forest Reinhardt, Henderson is co-director of the recently launched “Business and the Environment” initiative, a group that includes more than 40 faculty at the Business School and that is actively collaborating with faculty from across the University.

“I am thrilled by this honor,” Henderson said. “We cannot address the environmental challenges we face without the active participation of the private sector, and at Harvard I’m surrounded both by an incredibly smart group of colleagues who are committed to finding ways to make this participation both possible and profitable, and by gifted students who are passionate about making a difference. It’s an incredibly exciting time.”