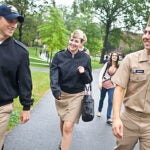 Of brass and khakis

Archaeologist studies classical art, and what it reveals about other cultures

Adrian Staehli’s office is lined floor to ceiling with uniform black and red, two-inch-thick binders, which constitute a self-made library of every document he wanted to take with him when he moved from Zurich.

Staehli, a new professor of classical archaeology, is hardly as severe as the binders, or as his Swiss-born, German-trained pedigree, suggest. His work, too, seems designed to shake up the sometimes-stuffy study of antiquity.

As the Department of the Classics’ newest tenured faculty member, Staehli studies more than just old pottery shards. His work explores the ways that Western cultures — from Renaissance artists in the 15th century to Nazis and Italian fascists in the 20th — have bent ancient Greek culture to their own ends, and how those interpretations shape what we now consider classical art. In the process, he tries to discern from fragmentary evidence how the Greeks actually saw themselves.

“Not everybody likes it when somebody like me comes and says, ‘What you consider a model of aesthetic perfection was an invention of Nazi ideologists, among others,’” Staehli said. “Destroying romantic ideals about Greece is not everything. I have to do some work digging up all the Greek stuff itself.”

A big part of that is deconstructing the famous classical Greek nude. In a forthcoming book, Staehli hopes to show how much we read into those naked sculptures that the Greeks themselves did not.

Romans admired Greek classical nude sculpture of the 6th through 4th century B.C., making copies that survive today and setting an aesthetic ideal that persisted in Western art for centuries. But to the Greeks, Staehli said, the nudes were meant to serve as a social or cultural model, not an artistic one.

Greek sculptors “were interested in showing what the body can do,” he said. “Nakedness was just a window onto that, to show what makes up a male and later a female body,” and what the body of say, a warrior or an athlete would look like.

The Romans were only the first broad culture to co-opt the Greeks. Renaissance artists such as Michelangelo and da Vinci famously embraced classical antiquity. A less-publicly acknowledged fact, Staehli said, is that modern-day propagandists in the Third Reich and Mussolini’s Italy were big fans, too.

Nazi propagandist Alfred Rosenberg created a department of archeology, Staehli said, to probe the tombs of ancient Greeks to prove they were the predecessors of Germans. “Olympia,” Leni Riefenstahl’s 1938 film about the 1936 Olympic Games, utilized the image of a Greek runner transforming into a modern German.

The Olympic torch, created by Nazi propagandists for the 1936 games, was more than just a symbol of sportsmanship, Staehli said. “It was an ideal: ‘We’re all rooted in classical antiquity.’ ”

“These images were seen by millions of people,” he said. “They produced an image of antiquity that was convincing … and our estimation of antiquity today is shaped in part on it.”

Archaeology captured Staehli’s imagination in his youth, when his family made regular trips to excavation sites in Greece, Tunisia, Algeria, and elsewhere. His father had always wanted to be an archaeologist and finished his Ph.D. by night while working as a schoolteacher to support his family.

“It was very romantic to me as a child of 8 or 9 years old,” Staehli said. But, he added, “I’m very much now on the side of destroying those romantic issues — of beautiful Greece, the ruins of Western tradition, and so on — that first led me to archaeology.”

Staehli studied for his Ph.D. at the Free University of Berlin in the 1990s. At the time, Germany was leading the shift in the discipline’s focus, away from an emphasis on art history and classification of objects and toward a newfound fascination with the social and cultural context of the ancient artifacts.

Leaving the more conservative culture of Bern was serendipitous. “Otherwise I would have ended up in Switzerland as a very boring archaeologist making some typologies of artifacts,” he said with a laugh.

He returned to his native country to teach, first at the University of Zurich and then at the University of Basel. In 2010, Staehli was offered the position in the Harvard Faculty of Arts and Sciences. Neither he nor his wife, a French librarian who had long lived in Switzerland, had ever lived in the United States. Staehli had only visited once.

The decision to come to Harvard “was hard and absolutely exciting,” he said. “But this is the peak. It feels like being somewhere in the clouds.”

He already has one semester at Harvard under his belt, and he’s eager to teach this fall.

“I appreciate it enormously,” he said. “The students know what they want and why they’re here. It’s a pleasure to teach them.”