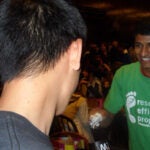 Cynthia Verba may be the premier authority on French Enlightenment composer Jean-Philippe Rameau. But the work she is best known for makes no mention of music theory or Gallic philosophy.

The title, like its author, brings to mind a more genteel time in academe: “Scholarly Pursuits.” It’s Verba’s calling card, a dissertation on the dissertation  — and everything else that graduate students encounter on the road to becoming professors.

“My family teases me because this gets more hits than my first book on Rameau,” Verba said, holding up a bound copy of her volume published by the Graduate School of Arts and Sciences (GSAS), where she is director of fellowships.

In more than three decades at Harvard, Verba has become a professional guru for graduate students trying to get ever-more-competitive fellowships and tenure-track jobs. She’s also a scholar in her own right, which allows her a special kinship with the students who show up to her Holyoke Center office looking to improve drafts of their application essays.

Verba has developed a reputation as a sharp editor and a dispenser of tough love. One Harvard student created a Facebook group devoted to the advising experience: “Cynthia Verba Still Makes Me Cry — But Sometimes They’re Tears of Joy!!”

“She is not there to make you feel great about your draft,” said Kirstin Scott, a second-year student in the interdisciplinary health policy doctoral program. “She’s there to help ensure you walk out with a strong essay or a plan for how to improve it.”

With Verba’s help, Scott secured federal funding from both the National Science Foundation and the Jacob K. Javits Fellowships Program (though she ultimately had to decline the latter). Scott has become an acolyte, recommending Verba to incoming Ph.D. students every chance she gets. “I feel incredibly indebted to her,” Scott said.

Verba’s Harvard connection dates back more than 50 years ago, when she met her husband, then “a very sophisticated Harvard sophomore,” while working as a camp counselor. (The dashing sophomore, Sidney Verba, went on to become a respected political scientist and director of the Harvard Library, and now holds the title of Carl H. Pforzheimer University Research Professor Emeritus.)

Verba earned a master’s degree at Stanford and a doctorate in musicology at the University of Chicago while raising the couple’s three daughters. The family settled at Harvard for her husband’s appointment, and in 1978 she took a job advising graduate students at Harvard’s Office of Career Services. At the time, Harvard had no professional counseling for Ph.D. candidates.

“This was a brand new field,” Verba said. Doctoral students “were surrounded by scholars, and yet no one thought to tell them how to become a scholar.”

She found she was making up ways to help as she went along. “My husband says an idea doesn’t exist until you can write it down,” she said. So she did, drafting “Scholarly Pursuits” in the early 1980s and helping to professionalize a new administrative field in higher education.

She transitioned into her current position at GSAS in 1986. Until three years ago, she also taught music history at Harvard Extension School.

At the start, Verba made two promises to herself: that she would continue to pursue her scholarly passion — her work on Rameau — and that any advice she gave her student advisees she would follow herself.

She kept her word. Her first book, “Music and the French Enlightenment: Reconstruction of a Dialogue, 1750-1764,” was published by Oxford Clarendon Press in 1993, and “Dramatic Expression in Rameau’s Tragédie Lyrique: Between Tradition and Enlightenment” is forthcoming from Cambridge University Press.

“It’s my goal to help students, but it’s also in my own interest to be practicing what I preach,” she said. “I do not find it easy to go to publishers and say, ‘You’ll love my book,’ [or] to contact French scholars and say, ‘Would you be willing to read a draft?’ So I know when I tell students to do it, I’m giving them a challenge.”

Despite its obstacles, the life of a scholar is rich with rewards, Verba said. She relishes the chance to see graduate students thrive in their disciplines.

“I think they’re all crazy,” she said, stopping abruptly to clarify. “Crazy like an artist, because of their deep commitment. I have that feeling about my life, and I like to see it in theirs.”