The disciplines of dance 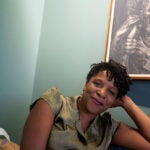 A tale of two sisters

Jill Johnson wants her love of dance to be contagious.

The new director of the Office for the Arts at Harvard’s (OFA) Dance Program intends to bring her passion for the medium to everyone she can, from undergraduates to the scientists at the Harvard-Smithsonian Center for Astrophysics located next door to the Harvard Dance Center on Garden Street.

“I am fascinated by this idea of transdisciplinary investigation, and that dance is a substantive source of inquiry,” said Johnson, a redhead with a bright smile and an outlook on life she likes to call her “radical optimism.” “I want to cast a wide net and say this is about ideas.”

Exposing the Harvard Dance Program to the diversity and interests of the students and faculty is a priority for Johnson, who also intends to bring “their love of learning to bear on learning about the world of dance,” through workshops, classes, discussions, and performances.

“Architecture, philosophy, theory, math — these are all things that I think are fundamental studies for dancers,” said the native of Canada. Johnson plans to invite guest artists who will teach classes, including Ronald K. Brown, the choreographer of the American Repertory Theater’s current production of “The Gershwins’ Porgy and Bess.”

During a recent master class, Johnson had students swing their bodies along the line of a giant imaginary letter X to the tune of Stevie Wonder’s “Don’t You Worry ’Bout a Thing.” The aim of the exercise, called a cross-hemisphere warm-up, is to “wake up neuropathways,” by crossing over the midline of the body, said Johnson.

“Right on! Nice!” she cheered as the class swiveled and swayed.

“What are you studying?” the inquisitive teacher asked one of her students in the front row. When she heard “neurobiology,” Johnson jumped with excitement. “We have to talk. I am so curious about movement and the prefrontal cortex.”

Johnson has a profound curiosity and loves blending boundaries. Her mother’s work as a music therapist meant that movement and music were ever-present at home. Later, with her own choreography, Johnson carefully fused the classic with the modern.

From the outset, dance captured her heart.

“As my mother describes it, my love of dance developed pretty much right away,” said Johnson on a recent afternoon outside the Garden Street studio, her fire-red hair ablaze in the sun.

At age 9, she enrolled at the National Ballet School of Canada (NBS), intent on a career in classical dance.

“I knew what I wanted,” said Johnson, who dreamed of becoming the next Veronica Tennant or Karen Kain, Canada’s prima ballerinas. But at 19 her focus shifted when choreographer William Forsythe cast her in his work “The Second Detail,” and the world of modern dance came rushing in.

“It was like a giant door opened, and I found a rich artistic terrain to explore.”

She credits Forsythe, her mentor and longtime collaborator — they are now developing a piece for Mikhail Baryshnikov — with fundamentally altering her approach to dance.

Johnson enjoyed a successful solo career with NBS, as well as with Forsythe’s company Frankfurt Ballet. Her passion extended to her work as teacher and choreographer. For the past 13 years, she has staged Forsythe’s work worldwide. Her teaching career includes positions with Princeton University, Barnard College, Columbia University, New York University’s Tisch School of the Arts, as well as the Ailey School, the Joffrey Ballet School and the Juilliard School.

At Harvard, Johnson succeeded Elizabeth Bergmann, the program’s longtime director who retired in February. Johnson immediately immersed herself in the University community. She choreographed a movement element for the recent Harvard event that commemorated the 10th anniversary of 9/11, and is working on a piece for the University’s 375th celebration next month.

In addition to teaching an advanced ballet class, as a senior lecturer in the Harvard University Department of Music, Johnson will teach “Fundamentals of Improvisation and Composition — Dance” this fall, and “Master Work — The Choreographic Process of William Forsythe” in the spring.

“I think it’s such an exciting and very natural connection,” said Johnson of her joint appointment in music and dance. “Music is such an integral part of my teaching.”

Office for the Arts Director Jack Megan said Johnson is perfectly poised to build on the efforts of Bergmann, who expanded the program to include more than 800 dancers and developed a deep connection to the University’s curriculum.

Johnson’s curiosity about other disciplines, her desire to explore new modes of movement, and the expression of ideas through movement, said Megan, make her ideal for Harvard.

“I think that’s an incredible attribute to have coming into a University, where everybody is a genius at something. You have to be capable of drawing out those people, of piquing their curiosity about what you can do to express those ideas. She has that natural collaborative warmth and ability to engage,” Megan said.

While Johnson calls her desire to meld dance and academia “a bit of a crusade,” she is eager to engage.

“There are no weapons involved,” she said, laughing. “Just ideas.”