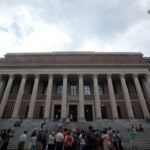 Ali Asani, professor of Indo-Muslim and Islamic religion and cultures and chair of the Department of Near Eastern Languages and Civilizations, has been named the director of Harvard’s the Prince Alwaleed Bin Talal Islamic Studies Program.

Established in 2005, the program aims to foster understanding between the Islamic world and the West through scholarship, teaching, and educational programming. As director, Asani will be responsible for coordinating the activities of the program, proposing outreach efforts to promote informed education about Islam and providing overall direction with the help of the program’s steering committee.

A world-renowned scholar on Islam and Muslim cultures, Asani has worked with students and educators from Texas to Pakistan and served on the American Academy of Religion’s task force on religion in schools. He lectures extensively on various aspects of the Islamic tradition. At Harvard, in addition to seminars for graduate students, he offers several general education courses on Islam and Muslim societies designed to educate undergraduate students about the dynamic relationship between religion and the complex contexts in which it is embedded. In 2002, Asani was awarded the Harvard Foundation medal for his efforts to improve intercultural relations through a better understanding of Islam and Muslim cultures.

“Ali Asani’s dedication to the scholarly study of Islam, his admirable commitment to teaching our undergraduates, and his leadership in curriculum reform and outreach have served the University well,” said Jorge I. Dominguez, Antonio Madero Professor for the Study of Mexico and vice provost for international affairs. “I look forward to working with him in his new role directing this program.”

“One of the goals of this program is to examine Islam as a global civilization, not just as a Middle Eastern one,” Asani said. “I’ve been engaged in that study for more than two decades. One of my main interests is the practice and interpretation of Islam in various cultural environments. Directing a program that is transnational and interdisciplinary in its scope is a particularly exciting opportunity for me.”

Although Asani has been a faculty member for more than two decades, his association with Harvard goes back even further.

“What we are trying to do is leverage the resources we have here at Harvard — the world-class faculty, programs like the Religious Literacy Project, the Aga Khan Program for Islamic Art and Architecture, the Islamic Legal Studies Program, along with many others — to address a serious gap in education about Islam and Muslim cultures not only at Harvard, but in the larger community beyond the University,” Asani said.

To that end, Asani has helped coordinate a number of initiatives since the program was created, including educational outreach for journalists and K-12 teachers and students, and the creation of two seminar series — one for college and university faculty in Greater Boston, and one for area graduate students. In 2010 he organized the second annual Prince Alwaleed bin Talal Islamic Studies Conference on the topic “Contemporary Muslim Voices in the Arts and Literatures,” which brought leading Muslim artists, musicians, and scholars to Harvard.

“We are living at a time when misunderstandings and misrepresentations of both the Muslim world and the West and America are growing exponentially,” Asani said. “The educational initiatives in which Harvard is engaged are intended to counter these distortions. If unchecked, misinformation and stereotypes can create fear and prejudice of those who are different from us, thus constituting a danger to democracy and international and intercultural relations. Democracy cannot function when you are afraid of your neighbors. I see this program as an effort to address widespread global illiteracy about religion and culture, an illiteracy that has serious national and international consequences.”