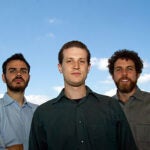 After a rain, the cupped leaf of a pitcher plant becomes a virtually frictionless surface. Sweet-smelling and elegant, the carnivore attracts ants, spiders, and even little frogs. One by one, they slide to their doom.

Adopting the plant’s slick strategy, a group of applied scientists at Harvard have created a material that repels just about any type of liquid, including blood and oil, and does so even under harsh conditions like high pressure and freezing temperatures.

The bio-inspired liquid repellence technology, described in the Sept. 22 issue of Nature, should find applications in biomedical fluid handling, fuel transport, and anti-fouling and anti-icing technologies. It could even lead to self-cleaning windows and improved optical devices.

“Inspired by the pitcher plant, we developed a new coating that outperforms its natural and synthetic counterparts and provides a simple and versatile solution for liquid and solid repellency,” says principal investigator Joanna Aizenberg, Amy Smith Berylson Professor of Materials Science at the Harvard School of Engineering and Applied Sciences (SEAS), director of the Kavli Institute for Bionano Science and Technology at Harvard, and a core faculty member at the Wyss Institute for Biologically Inspired Engineering at Harvard.

By contrast, current state-of-the-art liquid repellent surfaces have taken cues from a different member of the plant world. The leaves of the lotus resist water owing to the tiny microtextures on the surface; droplets balance on the cushion of air on the tips of the surface and bead up.

The so-called lotus effect, however, does not work well for organic or complex liquids. Moreover, if the surface is damaged (e.g., scratched) or subject to extreme conditions, liquid drops tend to stick to or sink into the textures rather than roll away. Finally, it has proven costly and difficult to manufacture surfaces based on the lotus strategy.

The pitcher plant takes a fundamentally different approach. Instead of using burrlike, air-filled nanostructures to repel water, the plant locks in a water layer, creating a slick coating on the top. In short, the fluid itself becomes the repellent surface.

“The effect is similar to when a car hydroplanes, the tires literally gliding on the water rather than the road,” says lead author Tak-Sing Wong, a postdoctoral fellow in the Aizenberg lab. “In the case of the unlucky ants, the oil on the bottom of their feet will not stick to the slippery coating on the plant. It’s like oil floating on the surface of a puddle.”

Inspired by the pitcher plant’s elegant solution, the scientists designed a strategy for creating slippery surfaces by infusing a nano/microstructured porous material with a lubricating fluid. They are calling the resulting bio-inspired surfaces “SLIPS”  for slippery liquid-infused porous surfaces.

“Like the pitcher plant, SLIPS are slippery for insects, but they are now designed to do much more: They repel a wide variety of liquids and solids,” says Aizenberg. SLIPS show virtually no retention, as very little tilt is needed to coax the liquid or solid into sliding down and off the surface.

“The repellent fluid surface offers additional benefits, as it is intrinsically smooth and free of defects,” says Wong. “Even after we damage a sample by scraping it with a knife or blade, the surface repairs itself almost instantaneously and the repellent qualities remain, making SLIPS self-healing.” Unlike the lotus, the SLIPS can be made optically transparent, and therefore ideal for optical applications and self-cleaning, clear surfaces.

In addition, the near frictionless effect persists under extreme conditions: in high pressures (as much as 675 atmospheres, equivalent to seven kilometers under the sea), humidity, and colder temperatures. The team conducted studies outside after a snowstorm; SLIPS withstood the freezing temperatures and even repelled ice.

“Not only is our bio-inspired surface able to work in a variety of conditions, but it is also simple and cheap to manufacture,” says co-author Sung Hoon Kang, a Ph.D. candidate in the Aizenberg lab. “It is easily scalable because you can choose just about any porous material and a variety of liquids.”

To see whether the surface was truly up to nature’s high standards, the researchers even did a few experiments with ants. In tests, the insects slid off the artificial surface or retreated to safer ground after only a few timorous steps.

The researchers anticipate that the pitcher plant-inspired technology, for which they are seeking a patent, could one day be used for fuel- and water-transport pipes, and medical tubing (such as catheters and blood transfusion systems), which are sensitive to drag and pressure and are compromised by unwanted liquid-surface interactions. Other potential applications include self-cleaning windows and surfaces that resist bacteria and other types of fouling (such as the buildup that forms on ship hulls). The advance may also find applications in ice-resistant materials and may lead to anti-sticking surfaces that repel fingerprints or graffiti.

“The versatility of SLIPS, their robustness and unique ability to self-heal, makes it possible to design these surfaces for use almost anywhere, even under extreme temperature and pressure conditions,” says Aizenberg. “It potentially opens up applications in harsh environments, such as polar or deep-sea exploration, where no satisfactory solutions exist at present. Everything SLIPS!”

Aizenberg is also professor of chemistry and chemical biology in the Department of Chemistry and Chemical Biology, and Susan S. and Kenneth L. Wallach Professor at the Radcliffe Institute for Advanced Study. In addition to Wong and Kang, co-authors include Sindy K.Y. Tang, Benjamin D. Hatton, and Alison Grinthal, all at SEAS, and Elizabeth J. Smythe, at the Schlumberger-Doll Research Center.

The authors acknowledge support from the Croucher Foundation Postdoctoral Fellowship, the Air Force Office of Scientific Research, and the Army Research Office; and the use of the facilities at the Harvard Center for Nanoscale Systems (CNS), supported by the National Science Foundation.