On the Silk Road again 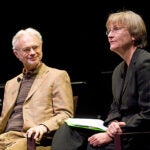 ‘Nixon in China’ and at Harvard

It wasn’t your average day in the expansive Spangler lounge at Harvard Business School (HBS).

The sounds of a Galician bagpipe, a conch shell, a tambourine, and a host of other instruments shattered the hall’s typically hushed atmosphere to the delight of a large lunchtime crowd of potential future entrepreneurs and CEOs.

Clad in a dark blue pinstripe suit, HBS Dean Nitin Nohria happily plunked himself on the floor, the only place left to sit, and quickly began tapping his foot to an infectious beat as members of the Silk Road Ensemble partook in a brief performance and discussion with the audience. The event was part of the ensemble’s weeklong residency at Harvard.

Affiliated with the University since 2005, the group, made up of internationally renowned performers and composers from more than 20 countries and led by celebrated cellist and Harvard alumnus Yo-Yo Ma, moved to its North Harvard Street headquarters in Allston last year.

The residency is part of a five-year collaboration between Harvard and the Silk Road Project, a nonprofit inspired by the cultural traditions of the ancient Eurasian Silk Road trade routes that connected east with west. The project promotes learning through the arts. For the next several years, the ensemble will present a series of performances, workshops, and collaborations with local arts, cultural, and educational institutions.

In collaborating with HBS, the ensemble hopes to engage with and learn from future business leaders focused on social entrepreneurship. It also aims to explore the intersection between the worlds of business and the arts, and the notion of cultural entrepreneurship.

The idea for it grew out of a meeting between Laura Freid, the Silk Road Project’s chief executive officer and executive director, and Nohria, who discussed the importance of common interests and the meaning of creating value in society, said Ma, the project’s founder and artistic director.

“We always say that in music the tip of the iceberg is the sound, but what’s behind the sound is the music, which is actually values,” said Ma. He said that the ensemble will work with the Business School and other Schools at Harvard to identify those values.

During the week, the ensemble also helped Harvard undergraduates to create music. Last Saturday, student composers met with members of the ensemble and were introduced to some of the group’s instruments, including a gaita, a Galician bagpipe; a shakuhachi, a Japanese bamboo flute; and a jang-go, a Korean hourglass drum.

The young composers then worked overnight creating compositions based on either traditional melodies from India or Galicia, Spain. On Sunday, the students reconvened to work on their scores with support and input from ensemble members.

For freshman George Meyer, being up all night was a small price to pay for creating a composition with the help of such gifted musicians. Meyer, a talented violinist from Nashville who has a classical music background but is also steeped in the bluegrass tradition, called the collaboration “thrilling.”

“They have composers who are working on their own pieces with the group right now, so we got to work with them as we were doing the same thing.”

“It was intense,” said Meyer, “but very fun. … It’s a fun challenge to deal with something as loud as the bagpipes and as soft as some of the other instruments like the kamancheh,” a bowed Persian instrument.

Some student performers also learned pieces from the group’s non-Western repertoire, which they will perform with the ensemble during a sold-out concert at Harvard’s New College Theatre tonight at 7, an event presented by the Office of the President. Ma and Homi Bhabha, director of the Mahindra Humanities Center, will give a pre-concert talk on neighborliness and the arts.

“One of our guiding principles at the Silk Road Project is that the best teachers are also the best learners,” said Freid. “So it has been truly rewarding to watch the fluid dynamic of teaching and learning unfold this week in our collaboration with Harvard undergraduates. We were especially excited to work with students in creating new arrangements for the ensemble. In this way, we are hoping to encourage the student body to become an active part of our roving creative laboratory.”

Later this week, members of the ensemble will also take part in a class called “The Arts In Education: Learning In and Through the Arts” at the Harvard Graduate School of Education. The class is taught by Steve Seidel, director of the School’s Arts in Education Program. The group will return to Harvard in January for an intensive workshop.