On the cusp of new transplant era 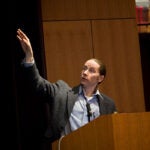 Transplant surgery is entering an era of new complexity, where complex surgeries will become standardized and the goal will be restoration of pre-injury form and function rather than merely reconstruction, the surgeon who led Brigham and Women’s Hospital’s face transplant team said Monday.

Bohdan Pomahac, director of plastic surgery transplantation at the Brigham and assistant professor at Harvard Medical School, said that today’s surgeons owe a debt to those who came before, as long ago as World War I, when surgeons used tissue from other parts of the body to rebuild facial structure lost through burns, injury, or wounds.

Though those tissues saved lives and allowed some function, they fell far short of a complete restoration to what existed pre-trauma. Patients lived, but were often disfigured.

“They had to use tissues that don’t belong to the face, that don’t look like the face, and shouldn’t be there,” Pomahac said.

Even as earlier organ transplants restored pre-injury function, the face transplant surgery pioneered at a handful of institutions today, including the Harvard-affiliated Brigham, has as its aim the restoration of form and function. Though the surgeries conducted so far are designed for each individual, Pomahac said he expects face transplant procedures to become standardized and the 15- to 20-hour operation to become more streamlined.

“Now we’re thinking, ‘How can we stay awake for so long?’ Ten years from now, we’ll look back and say, ‘What … were we doing for so long?’” Pomahac said.

Pomahac spoke at the Brigham’s Bornstein Amphitheater at a research symposium sponsored by the hospital’s Center for Regenerative Therapeutics. The center, part of the Brigham’s Biomedical Research Institute, aims to boost research into transplant and regenerative medicine.

The event opened with a look at the hospital’s illustrious transplant surgery past, with comments by Joseph Murray, professor of surgery emeritus at Harvard Medical School, who performed the world’s first organ transplant at what was then the Peter Bent Brigham Hospital in 1954. That surgery avoided the problem of tissue rejection by transferring a kidney between identical twins, but Murray continued to work on the problem of rejection, developing the first anti-rejection drug several years later. He won the Nobel Prize in physiology or medicine in 1990 for his work.

That first surgery was a team effort, Murray said, involving other surgeons, support personnel, and the hospital administration, which backed the effort and created an environment that made the Brigham “a unique world resource” in transplantation surgery. The surgery also wouldn’t have happened without the selflessness of Ronald Herrick, the twin brother who gave a healthy kidney to his ailing sibling, Richard, in a procedure that required soul-searching for all involved.

Despite his death being imminent without receiving a transplant, Richard told his brother the night before the operation to go home and not come back. Ronald opted to stay. Though the doctors were sure they had perfected their technique at the Surgical Research Lab at Harvard Medical School, Murray said they had ethical reservations because they would be performing a procedure on an otherwise healthy man who had nothing physically to gain from the procedure.

“We physicians are taught to do no harm,” Murray said. “To perform a surgical operation on a healthy patient for no benefit [to him] was a radical situation.”

The surgery was considered so groundbreaking that several years later a kidney transplant between minors, 12-year-old twins, needed the blessing of the Massachusetts Supreme Court before it could proceed, Murray said.

Brigham President Elizabeth Nabel delivered opening remarks at Monday’s session, saying she hopes the research programs supported through the Center for Regenerative Therapeutics would allow the Brigham to play a leadership role in regenerative medicine nationally. Nabel said research into stem cell biology and regenerative medicine has great promise to produce results with a rapid transition from the lab to the patient.

Other speakers reviewed an array of advances in the field, including the discovery of a protein that can serve as an early indicator of kidney damage, work toward understanding and boosting the kidney’s innate ability to heal itself, the discovery of lung stem cells and their work in repairing damaged lungs in mice, the use of natural models in areas like new kinds of surgical adhesive, and the growing understanding of the importance of blood vessels in controlling cancer.