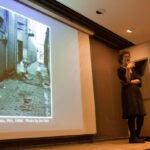 The return to recycling

Engineers at Harvard have created a device that may make it easier to isolate and study tiny particles such as viruses.

Their plasmonic nanotweezers, revealed this month in Nature Communications, use light from a laser to trap nanoscale particles. The new device creates strong forces more efficiently than traditional optical tweezers and eliminates a problem that caused earlier setups to overheat.

Optical tweezers have been an essential tool in biophysics for several decades, often used for studying cellular components such as molecular motors. Researchers can trap and manipulate the proteins that whip a flagellum, for example, and measure the force of its swimming motion.

But optical tweezers have drawbacks and limits, so researchers at Harvard School of Engineering and Applied Sciences (SEAS) are perfecting what might be called the “next-generation” model: plasmonic nanotweezers.

“We can get beyond the limitations of conventional optical tweezers, exerting a larger force on a nanoparticle for the same laser power,” says principal investigator Ken Crozier, associate professor of electrical engineering at SEAS.