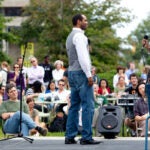 ‘Porgy’ in the park

Using rhythm and music and motion, Wynton Marsalis took a rapt audience through the evolution of the American dance form at a packed Sanders Theatre Thursday night.

For four and a half hours, the jazz legend recaptured the seamless mix of prose and performance that punctuated his April talk on the history of jazz and the blues. Thursday’s lecture, “The Double Crossing of a Pair of Heels: The Dynamics of Social Dance and American Popular Musics,” was the second in the two-year series, “Hidden in Plain View: Meanings in American Music.”

Community, courtship, social boundaries and barriers, race relations and segregation, and social change and strife were all part of the discussion, choreographed on stage through a fusion of music, beats, and history. Marsalis and his team of performers — Karen Amatrading, Lou Brockman, Heather Gehring, Jared Grimes, Christopher Lockhart, Nelida Tirado, Eddie Torres Jr., and Sheron Wray — danced their way through the decades on stage: the Charleston, the fox-trot, swing, the tango, the twist, and more.

Musicians and dancers know, Marsalis said, “that we are inextricably bound by a simple truth: we are each other.”

Throughout the years, rapidly changing dances meant music had to change, too, said Marsalis.

“The evolution of the dance demanded more and more of the musicians, who had to keep up with the changing steps and styles of movement.”

But, as dance continued to evolve, and dancers danced less with partners and more on their own, there was  “a unbridgeable generation gap on the dance floor,” he said, as ballroom dancing and the dance of the big halls began to fade.

Strong ties between dance and African-American culture have often been disregarded, Marsalis noted. While “music, being invisible, was harder to segregate,” the movement and sway and shake of the African-American dance forms could be altered and adapted to a “white middle-class taste … [directed] away from what they perceived as vulgar, animal dances.”

Instead of his six-piece band, Marsalis relied on his longtime friend, drummer Herlin Riley, to help him demonstrate time and the beat to a host of dances from the ’20s, ’30s, ’40s, ’50s, and ’60s.

The series of lectures highlights the University’s embrace of the arts, since a 2008 presidential task force called for a concerted effort to augment the arts on campus.

The musician and his team returned to the stage close to midnight to take questions from a group of audience members who wanted to hear more. One asked what it was like to play with Eric Clapton. Another inquired about the size of the mouthpiece Marsalis uses for his trumpet. Asked how he came to the idea of dance, Marsalis said he called friends and researched for a year in preparation for the lecture.

“I didn’t know anything about dance,” he said, adding that while he is confident with jazz, with dance “I felt like I was short on meaning.”

After more than four hours, countless lessons on music and dance and the social fabric of the country, no one complained about a lack of meaning.