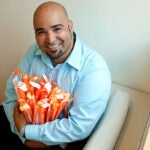 Popular Science magazine has selected Center for Astrophysics astronomer Justin Kasper as one of this year’s “Brilliant Ten” scientists. According to the magazine, the Brilliant Ten — all researchers under the age of 40 — represent the best of what science can achieve and demonstrate America’s continuing cutting-edge research.

Kasper was recognized for his work designing and developing an instrument that will literally “touch” the sun. When NASA’s Solar Probe Plus launches before the end of the decade, it will carry the Solar Wind Electrons Alphas and Protons (SWEAP) Investigation — the first instruments ever to directly sample the sun’s outer atmosphere.

“Popular Science was my first magazine subscription and a big inspiration for my interest in the physical sciences. I’m honored to be selected by Popular Science for this recognition, and delighted by the opportunity to talk about the amazing teams working on SWEAP and Solar Probe Plus,” said Kasper.