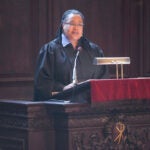 First lady Michelle Obama announced Sept. 2 that pediatrician Judith S. Palfrey, the T. Berry Brazelton Professor of Pediatrics at Harvard Medical School, will lead her Let’s Move! childhood obesity initiative as executive director. For decades, Palfrey has provided clinical care to thousands of children and families, conducted groundbreaking pediatric research, taught future physicians, and led major medical organizations. Palfrey has been a longtime supporter of the Let’s Move! campaign and spoke at its launch in February 2010 when she was president of the American Academy of Pediatrics.

“This is a terrific opportunity for Judy, one of this nation’s foremost pediatricians, to change the lives of thousands of children across America,” said Harvard College Dean Evelynn M. Hammonds. “I’m very pleased for her, and think the White House has made an excellent choice.”