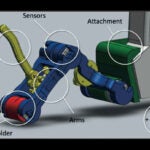 God is related to decision-making style, with those who rely more heavily on intuition reporting higher rates of belief, while those who are more reflective tilt toward atheism.

By linking religious belief to intuition, the study supports the idea that there is something in the cognitive makeup of humans that promotes belief in a higher power. For example, the natural tendency that people have to see a purpose behind random events, or the need to reduce uncertainty in their lives — as well as the anxiety it causes — may promote a belief in God.

The work, conducted by researchers in Harvard’s Psychology Department, found that cognitive style was an important indicator of religious belief. They found that this was true even when accounting for factors such as intelligence, education, income, and political orientation. They also found that more intuitive people reported an increase in religious faith over the course of their lives, a rise independent of religious upbringing.

“We know that family environment explains a lot of why some people believe more than others, but it doesn’t explain everything,” said Amitai Shenhav, a doctoral student in Harvard’s Psychology Department. “When researchers think about cognitive factors that might also play a role, they often bring up pure thinking ability. Our research suggests a more nuanced answer.”

The research, published in the Journal of Experimental Psychology: General, was conducted by Shenhav, postdoctoral fellow David Rand, and Joshua Greene, the John and Ruth Hazel Associate Professor of the Social Sciences.

“Science attempts to explain mysterious things in terms of things that are more basic and more general,” said Greene. “That’s what we’re doing here: How do the general operating characteristics of one’s mind affect one’s thinking about mysterious things like God?”

In one part of the study, subjects were given a short mathematical test designed to elicit erroneous but intuitive responses. The questions pose problems whose answers seem apparent at first, but whose solutions require closer examination. An example would be: Bill and Sally’s age totals 28 years. Bill is 20 years older than Sally. How old is Sally? The intuitive — but wrong — answer would be 8. The correct answer is 4. Those who answered all three questions with intuitive responses were one and a half times as likely to report being convinced of God’s existence than were those who answered none intuitively. The researchers also used measurements of IQ and personality to show that the effect was not about general intelligence, but instead was specific to cognitive style.

“This isn’t about how smart you are; it’s how much you follow your intuitions versus stopping and reflecting,” Rand said.

In the other part of the study, people were instructed to write a short essay about a time they relied on intuition rather than reflection, or vice versa. People who were instructed to recall a time when intuition helped them, or when careful reasoning hurt them, reported more belief in God than those who did the opposite.

The authors emphasize that their findings, by themselves, imply no value judgment about whether intuitive decision-making is better or worse than reflection. Indeed, Shenhav said, being able to make quick, intuitive decisions can be a great strength. People inevitably rely on both intuitive and reflective thinking, with different styles for different situations.

“It is one of the most impressive things our brain can do, crunch all that data down to an automatic answer,” Shenhav said.

The research builds on a small but rapidly growing body of knowledge about the psychology of faith, which is seen across human populations but is not well understood. The researchers’ aim is to get at the cognitive nuts and bolts of religious belief.

“How people think about tricky math problems is reflected in their thinking – and ultimately their convictions — about the metaphysical order of the universe,” Shenhav said.