How doctors think, past and present 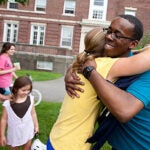 There was only one problem, according to David Jones: From his standpoint as a student of medicine and history, the theory didn’t make sense.

“There was a big disconnect between what thoughtful medical scientists would know about infectious disease and what many historians and scientists were saying about it,” Jones said.

The question became his dissertation and then his first book, “Rationalizing Epidemics: Meanings and Uses of American Indian Mortality since 1600,” a sweeping survey that cut through much of the conventional wisdom about why Native Americans have long suffered worse health than their white or black counterparts.

Now, as Harvard’s first A. Bernard Ackerman Professor of the Culture of Medicine, Jones ’93, A.M. ’97, M.D. ’01, Ph.D. ’01 will try to bridge the gap among scientific, clinical, and historical understandings about medicine that plagued him as a graduate student.

Jones’ work tore down many of the popular arguments about why native populations first died in the early modern era and exposed the social factors such as poverty, displacement, and malnutrition that have long left Native Americans more vulnerable to epidemics, from small pox in the 17th century to diabetes and obesity today.

“I think it’s just a critically important book, and it’s extremely impressive in that it was done by a young scholar,” said Allan Brandt, dean of the Graduate School of Arts and Sciences and a former professor of Jones. “His work has a lot of strong historical content, but it’s very forward looking.”

In his dual appointment at the Faculty of Arts and Sciences and Harvard Medical School (HMS), Jones will have the difficult task of looking to the past and future of medicine simultaneously.

But, as Jones argues, the two are closely linked.

“Historical arguments then serve as precedents for contemporary arguments,” he said. “For example, if this genetic determinist theory of [American Indians having] no immunity captures our imagination in the way that it does, what kind of precedent does that set for how we explain health disparities today?”

Just as genetics dominate the cutting edge of medical research today, he said, they also loom large in the study of diseases past. Jones’ mission — whether in studying history or teaching medical students in the present — is to make sure social factors get their due in explaining disease. In the process, he tries to reveal the unconscious biases in doctors’ thinking.

Jones grew up in Wellesley, Mass., and attended Phillips Exeter Academy, then Harvard. At the College, he dabbled in history, paleontology, geology, and premedical courses, completing a senior thesis in the history of geology under the legendary evolutionary biologist — and notoriously imperious professor — Stephen Jay Gould.

“It took me a long time to get up the nerve to talk to him,” Jones said. “I think he was just pleased someone had finally come by his office hours.”

He continued on to HMS, where he got involved with a study of Cold War-era government radiation testing on unwitting human subjects, a scandal that had just been uncovered. The work fascinated him and persuaded him to put his medical training on hold to pursue a doctorate in the history of science, then an uncommon course of study.

“The fear was always that people will always ask you, ‘Why aren’t you trying to cure cancer?’ ” Jones said. “But in working on a project that was in the news, the importance of history became self-evident.”

After finishing both degrees in 2001, Jones completed his residency in psychiatry at McLean Hospital and Massachusetts General Hospital. Hoping to balance his academic and clinical passions, he took an assistant professorship in Massachusetts Institute of Technology’s Program in Science, Technology, and Society, and in his spare time worked shifts at Cambridge Hospital’s psychiatric emergency service — “a fascinating site for anyone interested in the social roots of disease.”

In 2006, Jones made his way back to HMS when the school decided to revamp its curriculum to include a greater emphasis on social science courses. HMS leading lights Paul Farmer, Jim Yong Kim (now president of Dartmouth College), and Brandt hired Jones to help them create and teach a mandatory course for first-year students in social medicine.

Jones’ behind-the-scenes grunt work paid off, as students responded enthusiastically to the course. Last year, Jones was one of two winners of HMS’s prestigious Donald O’Hara Faculty Prize for Excellence in Teaching.

“He can be soft-spoken and low-key, but students really appreciate his commitment, his wry sense of humor, and his analytic sophistication,” Brandt said. “He cares deeply about other people.”

Jones is now turning his research to how doctors make treatment decisions, and the subtle ways in which outside factors, from reimbursement to public policy to medical culture, influence what constitutes “evidence-based medicine.” His study of the changing perception of heart disease and its treatment in the 20th century — a complete departure from his past work — will be published in two forthcoming books.

After juggling three jobs over the past several years, Jones breathed an audible sigh of relief at the thought of spending the upcoming academic year in one place. But he’s under no illusions about his new role.

The message that came with his tenure offer was clear, he said with his trademark wry grin. “They told me, ‘It’s a sign of how much we respect you, and how hard we expect you to work.’ ”