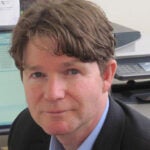 Regeneration a gift to cherish — and protect — Harvard expert says

The regeneration of the region’s forests over the last 150 years is an environmental gift that New Englanders shouldn’t squander with thoughtless development, the director of the Harvard Forest said Wednesday in a talk at the Harvard Museum of Natural History.

David Foster, director since 1990, said that New England forests are somewhat unusual in a world of increasing deforestation, in that they regenerated on their own during the last 150 years. The regrowth happened across the region as New Englanders quit their farms for cities and industrial jobs. Today, Foster said, New England is the nation’s most heavily forested, at 82 percent coverage.

“It is very difficult to keep trees out of the New England landscape and they marched right back and reclaimed the land,” Foster said. “History has provided New England with a remarkable gift.”

People wrongly assume that the forests are safe and that the landscape will remain the same into the future. In fact, Foster said, the 150-year period of forest growth and expansion has come to an end in recent years. Development is beginning to fragment the forest, and for the first time since the mid-1800s, the amount of forest cover in New England is declining.

“People assume the pressure is off New England forests, but it’s not,” Foster said. “There’s a tremendous amount of expectation … that things will stay the way they are.”

Foster’s talk, “Challenges and Choices: The History and Future of New England Forests,” was sponsored by the Harvard Museum of Natural History and co-sponsored by the Harvard Alumni Association. It was the first in a yearlong series focusing on New England forests, which is also the subject of a new exhibition at the museum’s Zofnass Family Gallery.

The history of the New England’s forests has been one of slow change over long periods of time. Going back thousands of years, Foster said, there have been shifts from forests dominated by spruce to pine forests and then to oak forests. Because this is a moist region, fire has not been a major disturbance for the landscape, though hurricanes are sometimes an issue.

“The bulk of the story is about very long, ongoing change,” Foster said. “Even a relatively recent arrival like chestnut has been here 3,000 years.”

The impact of native peoples on the forest was probably light, Foster said. They were largely hunter-gatherers and relied heavily on white-tailed deer. They did have some agriculture, including maize cultivation that they taught to early settlers, but that tended to be supplemental to their hunting and gathering lifestyle and didn’t affect the nature of the forest with large-scale clearing, he said.

Since Europeans arrived, the story has been of constant and rapid change. Clearing the forests for agriculture affected all of New England except northern Maine, Foster said, and the changes had far-reaching effects on wildlife, eradicating or greatly reducing deer, moose, bear, and wolves. With the forest regrowth, many species have come back, with deer so successful that hunts have been held around the Quabbin Reservoir to limit their damage to the forest. Moose are also now returning to Massachusetts by the hundreds.

Not all species have repopulated, notably wolves, and some that weren’t here before, such as coyotes, have come with the trees. Even as the trees have grown back, some open-field birds that thrived during the farming era, such as the bobolink and meadowlark, are in decline today.

A recent report by Foster and other experts calls for a major conservation effort aimed at saving 70 percent of New England’s forest cover. The report recommends a variety of strategies that are heavily dependent on private ownership, including establishing working forests, conserving land through conservation easements, and reserving some land for agriculture.

Such conservation is important, Foster said, because forests provide a variety of products and benefits that are under-valued by society. Aside from their use by extractive industries, such as logging, and as recreation sites, they are also important for environmental services they provide. One such service, Foster said, is illustrated by the Quabbin Reservoir. A large part of the Quabbin’s watershed has been purchased and conserved, and because that forest acts as a natural filter, the water that goes to faraway Boston does not need expensive filtration.

In addition, in an age when many are concerned about human-caused climate change, forests in New England and along the eastern seaboard are potentially important sinks for carbon, taking it from the air as the trees grow and locking it up in woody tissues. Studies at Harvard Forest show that the region’s young forests are absorbing carbon at an accelerating rate, mitigating, to some degree, human-induced climate change.

The same change, however, poses threats to the forests. Studies show that different tree species have been virtually wiped out in the past, with climate change a likely contributor.  While it is encouraging that the forests have recovered, Foster said, the bad news is that it has taken 1,000 years.