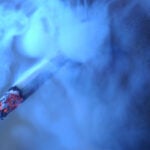 Economic impact of living with a smoker

Butterflies show how such creatures can be evolutionary winners

Harvard researchers are bringing new respectability to hybrids, showing that not all are evolutionary dead ends or short-lived mistakes and that some not only encompass the best traits of both parents, but create a unique mix that can endure as a separate species.

“Our work provides perhaps the first animal example that illustrates how hybrid species may be selectively favored when they inherit from their parent species-specific combinations of genes that underlie important ecological traits,” said Krushnamegh Kunte, a postdoctoral fellow at the center and lead author of the study, which was published online Sept. 8 in PLoS Genetics.

The research shows that the species formed in a burst of hybridization that likely occurred during the last interglacial period. As the range of the cold-adapted Canadian tiger swallowtail retreated north with the glaciers, the range of the warm climate-adapted eastern tiger swallowtail advanced northward and up into the Appalachian Mountains. The two species subsequently intermingled in the mountains during a changing climate.

“This trait combination helped the new hybrids to occupy a novel niche that the parent species was unable to occupy. The hybrids eventually evolved into a new species,” said Kunte. “This is a nice example of natural selection driving the origin of species. In this case, the North American thermal landscape, historical climate change, and mimicry provided the ecological stage for the evolution of a new hybrid species.”

The work was conducted by Kunte and Bauer Fellow Marcus Kronforst, the paper’s senior author, and a team of colleagues from the University of Texas, Austin, Princeton University, and Michigan State University.

Creating species through hybridization is common in plants, but is rare in animals, Kronforst said. Though attitudes are changing, until recently, hybrids outside the plant kingdom were thought of as evolutionary mistakes. While their parents are adapted over millions of years to fit certain environmental niches, hybrids sharing traits from two species tend to be poorly adapted to survive in either parent’s niche. In addition, hybrids can have physical problems. Mules, for example, which are crosses between horses and donkeys, are sterile.

The research, Kronforst said, enriches the picture of hybridization, illustrating that it is not merely a series of isolated accidents with little larger meaning, but rather an ongoing evolutionary process. Hybrids, Kronforst said, are a vehicle for the genetic mixing of parent populations. Sometimes the result is a less fit individual, and the impact on the larger population is negligible. Sometimes fertile hybrids result, and mate back with the parent species, providing an avenue for genetic exchange between parent species. In still other cases, Kronforst said, the hybridization can result in new species, mixing parental traits in a way that allows the offspring to inhabit their own environmental niche.

“Hybridization has huge creative potential even in animals, where it is often disregarded,” Kronforst said. “Hybridization can drive the creation of new species.”