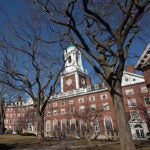 Nine researchers from across Harvard have received more than $15 million in special National Institutes of Health (NIH) grants designed to foster innovative research with the potential to propel fields forward and speed the translation of research into improved public health.

The nine, who include five members of Harvard’s Molecular and Cellular Biology (MCB) faculty, three Harvard Medical School (HMS) faculty, and one junior fellow in the Faculty of Arts and Sciences (FAS), were named recipients of the NIH Director’s Transformative Research R01 Award, Pioneer Award, and New Innovator Award. The awards are aimed at supporting innovative or unconventional research ideas that might have a broad impact on biomedical science.

“The NIH Director’s Award programs reinvigorate the biomedical work force by providing unique opportunities to conduct research that is neither incremental nor conventional,” said James M. Anderson, director of the Division of Program Coordination, Planning and Strategic Initiatives, who guides the Common Fund’s High-Risk Research program. “The awards are intended to catalyze giant leaps forward for any area of biomedical research, allowing investigators to go in entirely new directions.”

The largest grant — $8.2 million over five years — went to a team that includes Jeff Lichtman, Jeremy R. Knowles Professor of Molecular and Cellular Biology; Markus Meister, Jeff C. Tarr Professor of Molecular and Cellular Biology; and Joshua R. Sanes, professor of molecular and cellular biology. Lichtman and Meister are members and Sanes is Paul J. Finnegan Director of Harvard’s Center for Brain Science. A fourth member of the team, Sebastian Seung, is a professor of computational neuroscience in the Department of Brain and Cognitive Sciences and the Department of Physics at the Massachusetts Institute of Technology.

The team’s research is focused on the development of new technology that can speed up the process of mapping brain circuits. The challenge in drawing such maps now, is that, due to their small size, neuronal processes and the synapses that connect them must be mapped at very small resolution — typically as small as a single nanometer. The distributed nature of neuronal connectivity, however, means that the maps often cover range of a millimeter — 1 million nanometers — or more. To reconcile those competing priorities, Lichtman, Meister, and Sanes are developing a technique that combines sectioning, electron microscopic imaging, and reconstruction technologies — that could produce a 1,000-fold increase in the speed of diagramming brain circuits.

As a proof-of-concept test, the team will first reconstruct the retinal circuit of a mouse in its entirety, before later testing the technique on human tissue. Because neural circuits are unique for each individual, the hope is that this technique may be used to trace experiences and learned behaviors, and could potentially shed light on a number of developmental, aging, and behavioral disorders.

Engert plans to use the grant to study the neural basis of navigation, learning, and memory in a zebrafish model. He plans to create a virtual environment that paralyzed fish larvae can navigate and interact with entirely through the use of motor neurons. He will then study the flow of neural information as individual fish are trained to perform a variety of learning tasks. He also plans to use genetically encoded optic tools to activate and silence targeted subsets of neurons, allowing him to develop and test emerging theories.

The grant will allow Ramanathan to research how electrical activity and molecular circuits influence the development of progenitor cells that form various types of neurons in the brain. As part of the investigation, his team will construct a number of optical and imaging systems, microfluidics, and image-processing tools that may be of immediate use to the scientific community.

For Erez Lieberman-Aiden, a fellow at the Harvard Society of Fellows who will receive a grant of just over $2.5 million over five years, the program will support his work on using 3-D imaging to understand the spatial arrangement of cellular components. As an example, he cites the use of three-dimensional genome sequencing to help scientists understand what it means at a cellular level when they say a gene “turned on.”

“The NIH’s support for this kind of research is crucial,” Lieberman-Aiden said. “It’s easy to get research support for work that is likely to lead to a salable product in a year or two. But that isn’t the kind of basic research that has a deep and transformational impact on medicine. NIH is the single biggest supporter of basic scientific research of relevance to human health, and its funding is responsible for a lot of the deep, surprising findings that have fundamentally changed our understanding of biology in recent decades.”