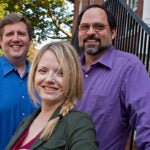 An international team of researchers studying DNA patterns from modern and archaic humans has uncovered new clues about the movement and intermixing of populations more than 40,000 years ago in Asia.

Using state-of-the-art genome analysis methods, scientists from Harvard Medical School (HMS) and the Max Planck Institute for Evolutionary Anthropology in Leipzig, Germany, have found that Denisovans — a recently identified group of archaic humans whose DNA was extracted last year from a finger bone excavated in Siberia — contributed DNA not just to present-day New Guineans, but also to aboriginal Australian and Philippine populations.

The study demonstrates that contrary to the findings of the largest previous genetic studies, modern humans settled Asia in more than one migration. According to David Reich, a professor of genetics at HMS, “Denisova DNA is like a medical imaging dye that traces a person’s blood vessels. It is so recognizable that you can detect even a little bit of it in one individual. In a similar way, we were able to trace Denisova DNA in the migrations of people. This shows the power of sequencing ancient DNA as a tool for understanding human history.”

The study also provides new insights about where the ancient Denisovans lived. According to Mark Stoneking, a professor at the Max Planck Institute who is senior author of the paper, Denisovans must have inhabited an extraordinarily large ecological and geographic range, from Siberia to tropical Southeast Asia. “The fact that Denisovan DNA is present in some aboriginal populations of Southeast Asia but not in others shows that there was a checkerboard of populations with and without Denisova material more than 44,000 years ago,” he said. “The presence of Denisovan genetic material in some but not all the groups there can most easily be explained if Denisovans lived in Southeast Asia itself.”

The findings appear on Sept. 22 in The American Journal of Human Genetics.

This research builds on previous work by Reich and colleagues at the Max Planck Institute, in which they analyzed an ancient pinky bone uncovered by Russian archaeologists in the Siberian Denisova Cave in 2008. The Max Planck Institute team led by Svante Pääbo sequenced the bone’s nuclear genome, and Reich led the population genetic analysis using algorithms that he and colleagues developed.

Reporting December 2010 in Nature, the team identified Denisovans as a distinct group of archaic humans (hominins) who lived more than 30,000 years ago and contributed genes to present-day New Guineans. The researchers concluded that Denisovans were neither Neanderthals nor early modern humans, though they shared a common ancestry.

This paper helped fill in some empty pieces in the evolutionary puzzle that began after early humans left Africa and reinforces the view that humans have intermixed throughout history.

The new study was initiated by Stoneking, an expert on genetic variation in Southeast Asia and Oceania who has assembled diverse samples from that region. The study takes a closer look at the Denisovans’ genetic footprint. The researchers analyzed DNA from dozens of present-day populations in Southeast Asia and Oceania, including Borneo, Fiji, Indonesia, Malaysia, Australia, the Philippines, Papua New Guinea, and Polynesia. Some of the data already existed, and some were newly collected for the study.

Their analysis shows that, in addition to New Guineans, Denisovans contributed genetic material to Australian aborigines, a Philippine “Negrito” group called Mamanwa, and several other populations in eastern Southeast Asia and Oceania. However, groups in the west or northwest, including other Negrito groups such as the Onge in the Andaman Islands and the Jehai in Malaysia, as well as mainland East Asians, did not interbreed with Denisovans.

The researchers concluded that:

• Denisovans interbred with modern humans in Southeast Asia at least 44,000 years ago before the time of the separation of the Australians and New Guineans.
• Southeast Asia was first colonized by modern humans unrelated to present-day Chinese and Indonesians, and that these and other East Asians arrived in later migrations. This “southern route” hypothesis has previously been supported by archaeological evidence, but has never had strong genetic support.

Investigators from the Broad Institute of Harvard and MIT, Germany, India, Taiwan, Japan, Malaysia, and the Netherlands also contributed. This study was funded by the Max Planck Society and the National Science Foundation HOMINID program.