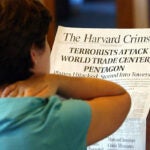 For many Americans, Sept. 11, 2001, evokes memories of confusion and sadness, a stunned sense of the world not being what it once was. For Jennifer Page Hughes, those feelings were all too familiar, from an earlier time in 1996.

Hughes was preparing to graduate from high school on Boston’s North Shore the year her father died. While walking the family dog on a cold spring Saturday, he fell through the ice on a local pond and drowned.

“It’s not something you ever imagine will happen,” said Hughes, now a counselor at Harvard’s Bureau of Study Counsel (BSC). Her father was simply there that morning — as she headed out the door to meet friends at the mall — and then he wasn’t. A loss of that nature, she said, “feels chaotic.”

Since then, she has found meaning in her own senseless tragedy by working to mitigate and confront the pain of grief on a much broader scale. Her clients include not just Harvard undergraduate and graduate students at the BSC, but the families of some 9/11 victims.

“I’ve made meaning of my own tragic loss by helping others going through painful experiences in their own lives,” she said.

Hughes began to confront and understand her own grieving process during her sophomore year at Williams College. Her grades had begun to slip, and a running injury sidelined her career on the track team.

“Not having that outlet of literally running away forced me to suddenly have to face some overwhelming emotions,” she said.

Eventually, she sought out a counselor at Williams and began dealing with her loss. The experience was so rewarding that it persuaded her to pursue counseling. She went on to earn a Ph.D. in counseling psychology at the State University of New York, Albany.

“While I would never have wished it to happen, that experience [of my father’s death] provided me with an increased sensitivity to a kind of pain or loss or experience that I otherwise wouldn’t have,” she said. “It’s forced me to gain a clearer understanding of myself and allowed me to better understand others.”

In 2004, while on an interview for her predoctoral internship at the University of Pennsylvania, she met an intern named Rob Fazio. They discussed their shared interest in grief counseling.

“He said something like, ‘So, who’d you lose?’ ” Hughes recalled. “It was the kind of direct question that only someone else who’s gone through loss would ask in that way.”

It turned out Fazio had lost his father in the World Trade Center attack. He asked Hughes to join his new nonprofit organization, Hold the Door for Others Inc., which he envisioned as a national support network of counselors and survivors interested in working through the psychological trauma brought on by sudden loss.

As a consultant for Hold the Door, Hughes now helps to create workbooks and other tools and leads group workshops. The organization also hosts a daylong summit every year, called Hold the Door Day, where roughly 100 participants attend workshops and group counseling sessions. This year’s event will take place Oct. 22 in Fort Lee, N.J.

Over time, the annual gathering has become an informal meeting ground for families affected by 9/11. “It’s very much been a community for them,” she said.

Now starting her sixth year at the BSC, Hughes relishes the opportunity to work with students. She and the bureau’s 10 other counselors, who operate under the umbrella of Behavioral Health and Academic Counseling, provide individual and group counseling, create and lead workshops on everything from study skills to adjusting to life at Harvard, and serve as liaisons to the undergraduate Houses to provide support to residential life staff.

In addition to providing grief counseling and running her own private practice, Hughes works with students struggling with learning and attention disorders and perfectionism. While the latter is much more visible on campus than the former, she said, both problems can be exacerbated by Harvard’s rigorous workload.

In a competitive and challenging environment, she said, counseling can give students the space to explore their fears, worries, or goals, just as she was able to do in therapy in the wake of her father’s death.

“The college years are such a significant time where there’s so much change and possibility,” she said. “To work with someone and see that change happening — and to have them share that journey with you — is so rewarding.”

The upcoming 10th anniversary of 9/11 can serve as a reminder, she said, that even after a decade grief persists.

“I hope that the spotlight’s back on [the victims’ families] in a good way,” Hughes said. “I hope people can understand that, for these families, or for anyone who’s experienced loss, it’s not something that goes away.”

But grieving can be transformed into a meaningful experience, as it was for her.

“It’s a way of keeping my father’s memory alive, and it informs the work I do every day,” she said. “It’s always going to be hard, but it’s made me who I am.”