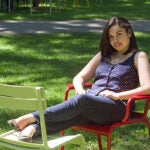 A college degree is not optional

The historic residence welcomes back students with food, fun

Named in honor of Charles William Eliot, president of Harvard from 1869 to 1909, Eliot House was opened in 1931. It was one of the original seven Houses at the College following the plan by Eliot’s successor, Abbot Lawrence Lowell, to “revitalize education and revive egalitarianism at Harvard College.”

Under Eliot, the longest-serving president (appointed when he was only 35 years old), Harvard became a worldwide university, and that sweeping nature was clearly visible when the House welcomed students back to campus on Aug. 31.

Returning students gathered in the “Great Court” amid Adirondack chairs made in previous years at the Eliot Woodshop, as well as blankets spread on the lush grass. House Masters Doug Melton and Gail O’Keefe greeted the returning students.  A fiery grill belched light smoke as hamburgers, hotdogs, veggie burgers, and grilled corn were cooked and served to residents in line.

Milling about, students greeted old friends from last semester and new sophomores with enthusiasm.  Games such as Frisbee broke out, and a few brave souls, including sophomore Kris Liu and junior Leah Reis-Dennis, sang or performed for their housemates.

Eliot, whose likeness was cast in bronze and overlooking the get-together, would likely have savored the event, and might have exclaimed, “Floreat domus de Eliot!” — roughly translated from Latin as “May Eliot House flourish.”