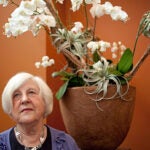 Around Harvard, relief comes in unlikely — and fluffy — forms

Students have returned, school is back in session, and Harvard has officially reawakened. But accompanying that shift are the latent worries and stresses of thousands of faculty and staff members who keep the University up and running. Suddenly, relaxed afternoons are as scarce as summery sunshine.

Of course, you wouldn’t know that to enter the Countway Library of Medicine. There, on Tuesdays and Thursdays, a welcome dose of tension diffusion comes in the form of a 10-pound ball of fluff named Cooper.

Since his addition four months ago, the 4-year-old Shih Tzu, a registered therapy dog, has proved as cuddly and irresistible to the Longwood Medical Area staff and students as a teddy bear to a toddler.

“The whole first part of his morning is staff coming in and stopping by to pet him,” said Joshua Parker, an access services librarian, who along with other staffers makes sure Cooper stays in his penned-in area behind the check-out desk. “It’s just quick and casual, but I think it’s had an overall positive effect on everyone’s morale.”

Cooper can be checked out by Harvard ID holders, just like a library book, for 30 minutes at a time. An unusually calm dog, he’s content to wrestle with a toy or cuddle on the library desk’s worn, brown couch with his “patients.”

Cooper is currently the University’s only four-legged stress reliever. But he’s far from the only unorthodox palliative available to overworked, overbooked, or just plain frazzled Harvard employees. For those looking to manage moderate stress, the University offers free or low-cost stress relief activities for people who, ironically, are too busy to leave campus.

“Harvard can be a very fast-paced and stressful environment,” said Loise Francisco, Cooper’s owner. She would know: Francisco is a senior research fellow in microbiology and immunobiology at Harvard Medical School (HMS), and her husband, Paul Anderson, serves as K. Frank Austen Professor of Medicine.

“Staff here oftentimes work 12-hour days,” she said. “It’s nice to get out of an enclosed office or laboratory setting and have an unstructured interaction.”

Self-care is critical, whether that means yoga, meditation, massage, exercise, or just scheduled downtime, alone or with a pet, said Jeanne Mahon, director of the Center for Wellness at Harvard University Health Services (UHS).

“The more stress you’re under, the more you need to dial it up, not dial it down,” Mahon said. “You’re busier, but you need it more than ever now. It’s so important to keep it on your to-do list.”

As the academic year has kicked back into gear, she has fielded calls from departments eager to book special stress-busting sessions for their staff members, overwhelming the center’s current resources.

The center’s services, from yoga classes to acupuncture and massage therapy — all of which are discounted for Harvard University Group Health Plan (HUGHP) members — provide an array of stress relief. But now the center is offering more free or low-cost activities, such as midday massage relaxation breaks on Mondays, Wednesdays, and Fridays, where 10-minute chair massages are just $12.

“It’s been a tough couple of years now for people, in terms of the economy, the cuts Harvard has had to make, and people’s financial situations,” Mahon said. “People are thinking, ‘OK, maybe I need to be doing something different. I need to handle the stress better, because it isn’t going to go away.’ ”

Mahon has noticed a “growing awareness” of alternative methods of stress relief around campus, such as the free meditation drop-in sessions she runs at UHS each Thursday with Suzanne Westbrook, a UHS physician and HMS clinical instructor.

At one recent lunchtime session, a dozen participants gathered as Westbrook led the group in a series of mindfulness meditation exercises. Westbrook’s words weren’t meant to be spiritual or even to conjure mental images, but to encourage those present to clear their minds of thoughts.

The process can be awkward at first; most people aren’t conditioned to tune out a growling stomach or a looming deadline and just sit. But Westbrook and Mahon have found the program attracts regulars. Ann Hall, assistant director of stewardship programs in Alumni Affairs and Development, has been attending the drop-ins since April.

“Within two weeks, I started noticing a change,” Hall said. “I started to chill out.”

Her stress, which had always manifested as pain in her chest and stomach, subsided. “Your body may respond even before your mind does,” she said.

But for some, there can never be too many ways to make good use of scarce downtime. Alec Harris, a student at Harvard Law School, just started coming to the weekly meditation sessions.

“I’ve found that my schedule is really intense,” he said. “I needed to build a little bit of space from the Law School” physically and mentally, and meditation helps, he said. Still, a mention of Cooper perked his ears.

“Wait, there’s a dog I can just check out at the library?”