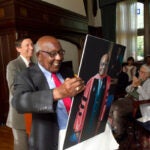 A portrait of change

Harvard gears up to celebrate an event-filled 375th anniversary

The arriving members of the Class of 2015 weren’t the only new additions brightening the Yard in the final days of August. Strollers in the center of campus might also have noticed a series of eye-catching red, black, and white banners going up across Tercentenary Theatre, marking the start of Harvard’s 375th year.

The signage is just the earliest reminder of the University’s milestone. From a campuswide birthday party on Oct. 14 to a host of events planned for students, faculty, alumni, and the local community, the 375th will be a yearlong celebration of “Harvard’s tradition of imaginative change,” said President Drew Faust.

“Such milestones encourage us to reflect on our institution’s remarkable past, and to remember that all we aspire to today finds inspiration in the creativity and commitment of those who have come before,” she said.

The year’s events are designed to look ahead — to a future marked by cross-disciplinary research, public service, entrepreneurial innovation, and artistic achievement at Harvard — more than to peer back at a storied past.

“Our venerable University is always in the process of becoming new,” Faust said. “Our forebears’ example reminds us that, while we stand on the foundations they have built, we must never stand still.”

The year will see the opening of two major spaces echoing the literal shifting foundations of the University. The Innovation Lab, which will house cross-disciplinary research teams and entrepreneurial start-ups at 125 Western Ave., will welcome students and faculty on Nov. 18. The Wasserstein Hall, Caspersen Student Center, Clinical Wing (WCC) complex at Harvard Law School will celebrate that new space on April 19.

Alumni will be invited back for the anniversary, first for the Harvard Alumni Association (HAA) reunions (Sept. 22-25) and then for the HAA board meeting (Oct. 13-15), which will coincide with the University-wide party Oct. 14.

The University hopes to bring the broader community into the anniversary celebration as well, said Christine Heenan, vice president of Harvard Public Affairs & Communications. Harvard will combine its Allston-Brighton and Cambridge Football Days — traditionally separate days when community members are invited to a Harvard football game — into a larger celebration on Oct. 15.

On April 10, Faust will speak at the Boston Public Library on her book “This Republic of Suffering: Death and the American Civil War” as part of this year’s Lowell Lecture Series, “Remembering the Civil War.” Faust’s talk will be one of several appearances by members of the Harvard community at public libraries across Cambridge and Boston throughout the year.

“The Cambridge, Allston-Brighton, and greater Boston communities have played and will continue to play a large role in the life of the University, and we plan to celebrate their involvement as part of the 375th,” Heenan said.

The Harvard Graduate Council’s annual leadership conference for graduate students across the University will get a facelift for the 375th, as well. The conference, which will bring together 400 students on Nov. 4 and 5 at the Northwest Laboratory, will focus on collaboration across disciplines.

The 375th “seemed like a really good umbrella for the conference to fall under,” said Harvard Medical School student David Duong, a conference organizer. The anniversary is an opportune time to think about “how Harvard wants to train future leaders in interdisciplinary thinking — training them not just how to think but how to communicate what the pertinent issues of your discipline are to other disciplines.”

Some popular ongoing cultural events, such as the Wynton Marsalis Lecture Series, Arts First, and Harvard On The Move, will be incorporated into the yearlong anniversary plans as well.

“I think it’s a fabulous idea,” said Ingrid Monson, Quincy Jones Professor of African-American Music, who will introduce Marsalis at his next talk on Sept. 15 at Sanders Theatre. The very idea that jazz and contemporary African-American music would be given such a prominent venue at Harvard might have been unthinkable in the past, she added.

“It just shows that what gets included under the rubric of Harvard changes over time,” Monson said. “We have a president and a community [that are] enormously open-minded about the scope of what Harvard can be.”