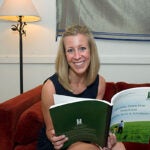 The gleaming, 200-watt, photovoltaic panels crowning Gutman Library — which is just down the street from where George Washington first assembled his troops during the Revolutionary War — may be the Harvard Graduate School of Education’s (HGSE) most prominent monument in the battle against greenhouse gas emissions.

What’s less evident, however, is the history of their placement, which reveals a particular zeal for going green by HGSE. Leading the School’s charge is a 12-member, all-volunteer task force that has dubbed itself “Mother Nature’s Posse” (also known as the HGSE Green Team).

The back story of those six gleaming panels goes like this: In 2008, as part of a University-wide pledge sponsored by the Harvard Office for Sustainability, 45 percent of the HGSE community took a vow to improve the environment — both on- and off-campus — through simple, everyday measures, such as shutting off lights, hanging wet laundry, recycling, and even forgoing paper napkins. The average pledge rate at most other Schools wasn’t quite half of that.

Owing largely to a full-bore campaign spearheaded by the School’s then 15-member Green Team, an effort that entailed emails, videos, posters, and word of mouth, more than 560 Ed School affiliates took the green plunge. For that, HGSE — one of the smallest Schools at the University — was awarded seed money toward a sustainability project. And though the funds didn’t pay for the solar panels outright, they did allow the Ed School to investigate and plan for implementation, marking HGSE’s first foray into renewable energy.

Together with two other notable facility improvements — the natural-gas-fired boilers in the basement of 13 Appian Way (a conversion from oil that was coordinated with the Radcliffe campus) and the 2009 classroom renovations of Larsen Hall geared toward energy-efficiency (earning two floors of the 45-year-old brick building LEED Platinum Certification) — the 2010 photovoltaic project is expected to reduce HGSE’s annual carbon footprint by 8.6 percent.

All told, these projects represent a calculable contribution on behalf of the Ed School toward the University’s overarching goal to cut greenhouse gas emissions 30 percent by 2016, including growth, based on 2006 levels. But here’s the kicker: Even as these physical improvements have come to symbolize the School’s commitment to reducing such emissions, they’re only part of the School’s overall sustainability efforts, which strive to keep a green ideology moving forward.

“For every initiative, it’s important to not just ask people to do something,” said Jason Carlson, the HGSE director of operations who also directs the Green Team. “It’s important to understand what and how their piece can contribute to something great.” For a place dedicated to teaching educators, this is no small matter.

Now in its fifth year, the Green Team is the main driver toward that something great, which has manifested in a range of green initiatives at the School. From a battery recycling program to an annual “freecycle” event to offering reusable mugs, the Green Team’s initiatives, according to Carlson, are “embedded in everything we’re doing.”

The diverse team is made up of faculty, staff, and students, representing the varying insights and concerns of the HGSE population. For instance, team member Meghan Garrity, a catering manager with Table of Contents, the School’s catering and dining services provider, has spearheaded back-of-the-house composting stations at three HGSE kitchens. (Garrity was also one of two team members honored for individual achievement at the second annual Green Carpet Awards in the spring.) This arrangement allows the group, which meets monthly, to serve as informed liaisons for its constituents and HGSE’s operating entities. Upon honing in on an appropriate concern or issue, the team works closely with HGSE Facilities Operations; ironing out the kinks and details of implementation before firing off an electronic “green tip” to 1,200 HGSE affiliates.

One of the team’s more involved initiatives was this past winter’s completion of a map outlining filtered water stations on the HGSE campus. An idea inspired by Harvard Law School, according to HGSE project manager and Green Team member Linda Kuczynski, the simple legend — which also includes signage above filtered water fountains — aims to entice thirsty people while reducing dependence on bottled water. Other targeted initiatives include a printer cartridge recycling program, a cosmetics drive, bike rack improvements, and, coming soon, single-stream recycling and public composting.

In the end, the collective impact of all these sustainable efforts, some of them burgeoning and creative, others tried and true, is a 10 percent reduction of the School’s carbon footprint (inclusive of growth, and as measured through fiscal 2010). Numbers like that suggest that the mindset behind that 2008 pledge has permeated the School’s culture. According to Carlson, the challenge and thrill will come in carrying that attitude to the world beyond the campus.

“What we get excited about is we’re educating educators,” said Carlson. “So what’s exciting to think about is the broader impact that we may be able to have if we leave our students with something when they go out into the sector to start educating people. If we can change them in just one way, the exponential impact that might have on our world is pretty inspiring and exciting.”