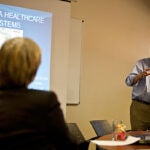 In late 1954, Richard Herrick was dying. Just 23 years old, he had been discharged from the Coast Guard months earlier and had come home to Massachusetts to reconnect with his family, which included his twin brother, Ronald.

But the joy of his reunion was tempered by Herrick’s diagnosis of kidney disease, which at the time was often a death sentence. By October, he was a patient at the Public Health Service Hospital in Brighton, Mass. His health was worsening.

His family kept a vigil by his bedside, but had been told that his kidneys were failing and that there was little hope of a cure. Yet Herrick’s doctor recalled that not far away, at the Peter Bent Brigham Hospital and Harvard Medical School (HMS), some doctors and scientists were working on the problem. They were devising ways to transplant healthy kidneys into those whose organs had failed, and they were looking for twins to attempt the first operation.

The small group was viewed with skepticism by the medical establishment, with one physician dubbing them “a bunch of fools” for their efforts. There were valid grounds for skepticism. After all, even if they could surmount the technical hurdles of the transplant — severing and reattaching blood vessels and other critical connections — the body’s rejection of foreign tissue was poorly understood and could not be overcome.

But the group of “fools,” led by a young surgeon and Harvard Medical School professor named Joseph Murray, felt strongly that they — and their dying patients — had nothing to lose and much to gain.

“If you’re going to worry about what people say, you’re never going to make any progress,” Murray said during a recent interview at his home in Wellesley Hills, Mass.

The group’s perseverance and skill would bear fruit just before Christmas that year when they performed the world’s first successful organ transplant, between Richard and Ronald. At 11:15 a.m. on Dec. 23, their work not only gave Richard a new lease on life, it ushered in the era of organ transplantation, giving hope to thousands of patients each year whose own organs are failing. Richard Herrick lived eight more years.

Today, roughly 17,000 Americans undergo kidney transplantation annually, according to statistics from the National Institutes of Health. Nearly all of them — better than 95 percent —survive the first year after surgery, and more than 80 percent are still alive five years later.

Not only have the number of kidney transplants skyrocketed, but physicians building on Murray’s and his colleagues’ work have pioneered the transplantation of many kinds of organs. Between 1988 and 2011, more than half a million organs were transplanted in this country alone, according to the U.S. Department of Health and Human Services (HHS). (At the same time, more than 121,000 people — including more than 600 children under age 5 — are waiting for organs in this country, according to HHS statistics.)

“It opened up a whole new concept of treatment, by substituting a failed organ with a healthy organ from someone else,” said Nicholas Tilney, the Francis D. Moore Distinguished Professor of Surgery at HMS and the Brigham, and author of the book “Transplant: From Myth to Reality (2003).” “When I got here in 1964, the early mortality rate following transplantation was as high as 50 percent. By the end of the year, there were virtually no survivors. Now, if someone dies, it’s a cause of great angst.”

As Harvard looks back at the 375 years since its founding, Murray’s work on organ transplantation stands out as a scientific and medical milestone, one that netted him the 1990 Nobel Prize in physiology or medicine. It also illustrates the potential impact of teaching and research at Harvard, and the potent partnership with the research, teaching, and patient care going on at its affiliated hospitals.

Murray’s milestone is just one in a long line of critical advances pioneered at Harvard and its affiliated institutions, from the first use of anesthesia at Massachusetts General Hospital in 1846, to the development of the computer by Howard Aiken in 1944, to the breakthrough by John Enders in 1948 that allowed the world to rid itself of polio, to more recent milestones, such as physicist Lene Hau stopping light in its tracks in 2005, and Harvard astrophysicists discovering planets orbiting other suns and divining that the universe is not only expanding, it is accelerating.

During this key period in kidney transplantation, Murray divided his time between the Surgical Research Laboratory at Harvard Medical School, where he worked out techniques used in that and subsequent operations, and the Peter Bent Brigham Hospital — today Brigham and Women’s Hospital. At the Brigham, Murray treated patients whose deaths he would work to stop and whose courage at undertaking risky transplant surgery paved the way for the lives routinely saved by such procedures today.

“I had no idea of the worldwide influence of it. It expanded to other organs, multiple organs,” Murray said.

Murray, today professor of surgery emeritus at HMS, gained his first experience in tissue transplantation during World War II. Fresh out of Harvard Medical School, he was drafted and spent the war at Valley Forge General Hospital in Pennsylvania. Among his duties was grafting skin on the many burn victims who passed through his ward, an experience that got him thinking about tissue rejection.

By 1954, the work in the Surgical Research Lab had paid off. Murray felt sure they could technically perform the surgery. The rejection issue still stood in the way, but drawing on experience from skin graft surgery, where it had been shown that tissue from identical twins was not rejected, he thought that transplanting kidneys between twins should work.

Though Murray and the other doctors involved had prepared extensively for the procedure, Murray said that he approached the operation as he would any other.  He once told a grandchild who asked how he got the Nobel that he didn’t work to get the prize, he just did what he thought best for his patients.

After the operation, Murray’s work on transplantation continued. Despite his success with the Herricks, the problem of rejection generally still presented a high hurdle.

In the years that followed, Murray used first X-rays and then drugs to suppress the immune system and keep the body from rejecting the grafted tissue, but there were few successes. Through those dark years, he and his colleagues pressed on, inspired by the dying patients who volunteered for surgery in hopes that, even if they didn’t make it, enough could be learned that success would come one day.

“We were trying. In spite of several failures, we felt we were getting close,” Murray said. “It’s difficult to translate the optimism of the Brigham staff and hospital. The administration really backed us.”

Finally, in 1962, in collaboration with scientists from the drug company Burroughs-Wellcome, Murray tried a drug, Imuran, on 23-year-old Mel Doucette, who had received a kidney from an unrelated cadaver donor. The success of that operation and the anti-rejection drug cleared the final hurdle to widespread organ transplantation between unrelated donors, and set the stage for the many refinements and breakthroughs by others in the years to come.

Murray’s legacy didn’t end with his retirement in 1986. The Brigham continues to be a center for transplant surgery, with pioneering work in face transplantation being done today by a team led by Assistant Professor of Surgery Bohdan Pomahac, director of plastic surgery transplantation at the Brigham, giving a new lease on life to people horribly disfigured by accident.

“He’s taken it far beyond anything anybody had dreamed of,” Murray said.