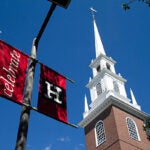 Expect the unexpected as Harvard kicks off its 375th anniversary next month with a celebration in Tercentenary Theatre that promises to be anything but predictable.

“No sea of chairs, no orations, no meandering processions,” said University Marshal Jackie O’Neill, whose office is organizing the Oct. 14 event. Instead, the Harvard family will be treated to an evening of mouthwatering desserts, lively performances, and general merriment — including a few surprises.

“People are used to gathering in Tercentenary for Commencement, a wonderful, annual occasion full of ceremony and ritual,” O’Neill said. “We hope to offer something memorable, but in a different, more interactive form: a festival-type experience.”

Preparations are already under way for the event, which will officially begin at 7 p.m.  For many attendees, the festivities will start earlier, when the undergraduate Houses, as well as the professional Schools, alumni association, faculty, and central administration gather for dinners and receptions across campus. At the undergraduate Houses, Annenberg Hall, the Dudley Café, and Cronkhite Dining Room, dinners will feature recipes and favorite foods from across Harvard’s 375 years.

“It’s been great fun to look at Harvard’s extraordinary history for inspiration on these menus,” said Director for Culinary Operations Martin Breslin, who noted that students might see classics such as hasty pudding and sherry trifle that evening.

After the dinners and receptions, groups of students, faculty, staff, and alumni will parade into Harvard Yard with music, costumes, and props, cheered on by the rest of the crowd. Student performers will entertain, while desserts and drinks featuring a variety of local businesses, many with Harvard ties, will keep the crowd satiated.

The event will feature a blend of old and new. Richardson’s Ice Cream, long a Massachusetts favorite, will scoop up traditional treats, while students from the “Science and Cooking” class will demonstrate making ice cream the new-age way, using liquid nitrogen. Local favorite Taza Chocolate will run a station along with Harvard chefs, complete with demonstrations, a chocolate fountain, and several thousand truffles.

“We’re very conscious of the fact that this event reflects Harvard’s remarkable history and transformation,” Director for Catering Madeline Meehan said. “We want to honor the past with authentic foods and recipes, while reflecting the present with cutting-edge methods of cooking.”

As part of the University’s overall sustainability efforts, the celebration will be zero-waste, with all food served from recyclable or reusable containers, and all service ware compostable or recyclable. Waste stations throughout the Yard will be monitored to help attendees determine what goes into recycling versus compost bins, and all leftovers will be donated or composted.
“It’s a huge undertaking to make such a large event zero-waste,” Meehan said. “But with everyone’s conscious participation, we can.”

Nobel laureate Eric Chivian, founder and director of the Center for Health and the Global Environment, will be on hand with an assortment of heirloom apples he grows on his 42-acre orchard in Petersham, Mass. Along with Newtown Pipins (George Washington’s favorite apple) and Esopus Spitzenburgs (a favorite of Thomas Jefferson), Chivian will showcase the Roxbury Russet, a variety that traces its roots back to a tree that grew in what is now the Roxbury part of Boston during the 1630s. The variety was likely cultivated by John Harvard, the first benefactor of the College, and grown in Harvard Yard, Chivian said.

“Everyone had apple trees back then,” he said. “And if you had apples, you probably had Roxbury Russets. They were America’s 17th-century apple.”

Harpoon Brewery will have a presence, serving up its 1636 ale, a Munich dark-style beer that the brewery, founded by Harvard alums Dan Kenary (’82) and Rich Doyle (’82, M.B.A. ’86), makes exclusively for the Queenshead Pub and the Faculty Club.

“The 1636 is one of our favorite beers,” Kenary said. “Its roasted malt flavors are perfect for an October night.”

In addition to desserts, revelers will be treated to performances by the Harvard-Radcliffe Orchestra and the Holden Choirs, cellist Yo-Yo Ma ’76, and a dance number choreographed by newly appointed dance director Jill Johnson. A huge red velvet cake, baked by Flour Bakery + Café founder Joanne Chang (’91), is expected to feed 4,000, and a live band will encourage dancing until midnight.

“This event is designed to have people mix, to get them together and talking,” O’Neill said. “So often, we’re all busy working in our Schools and departments, and we don’t have the opportunity to interact and experience the energy, talent, and diversity that is Harvard today. It’s time to come together, have a little fun, and celebrate all that defines us.”