What’s in a liquid 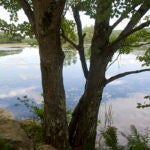 (SEAS) have invented a new device that can instantly identify an unknown liquid.

The device, which fits in the palm of a hand and requires no power source, exploits the chemical and optical properties of precisely nanostructured materials to distinguish liquids by their surface tension.

The finding, published in the Journal of the American Chemical Society, offers a cheap, fast, and portable way to perform quality control tests and diagnose liquid contaminants in the field.

“Digital encryption and sensors have become extremely sophisticated these days, but this is a tool that will work anywhere, without extra equipment, and with a very wide range of potential applications,” said co-principal investigator Marko Lončar, associate professor of electrical engineering at SEAS.

Akin to the litmus paper used in chemistry labs around the world to detect the pH of a liquid, the new device changes color when it encounters a liquid with a particular surface tension. A single chip can react differently to a wide range of substances; it is also sensitive enough to distinguish between two very closely related liquids.

A hidden message can actually be “written” on a chip, revealing itself only when exposed to exactly the right substance. Dipped in another substance, the chip can display a different message altogether.

“This highly selective wetting would be very difficult to achieve on a two-dimensional surface,” said lead author Ian B. Burgess, a doctoral candidate in Lončar’s lab and in the Aizenberg Biomineralization and Biomimetics Lab. “The optical and fluidic properties we exploit here are unique to the 3-D nanostructure of the material.”

The “Watermark Ink,” or “W-Ink,” concept relies on a precisely fabricated material called an inverse opal. The inverse opal is a layered glass structure with an internal network of ordered, interconnected air pores.

Co-authors Lidiya Mishchenko, a graduate student at SEAS, and Benjamin D. Hatton, a research appointee at SEAS and a technology development fellow at the Wyss Institute for Biologically Inspired Engineering at Harvard, recently perfected the production process of large-scale, highly ordered inverse opals.

“Two factors determine whether the color changes upon the introduction of a liquid: the surface chemistry and the degree of order in the pore structure,” said Mishchenko, who works in the Aizenberg lab. “The more ordered the structure, the more control you can have over whether or not the liquid enters certain pores by just changing their surface chemistry.”

Burgess and his colleagues discovered that selectively treating parts of the inverse opal with vaporized chemicals and oxygen plasma creates variations in the reactive properties of the pores and channels, letting certain liquids pass through while excluding others.

Allowing liquid into a pore changes the material’s optical properties, so the natural color of the inverse opal shows up only in the dry regions.

Each chip is calibrated to recognize only certain liquids, but it can be used over and over (provided the liquid evaporates between tests).

With the hope of commercializing the W-Ink technology, the researchers are developing more precisely calibrated chips and conducting field tests with government partners for applications in quality assurance and contaminant identification.

“If you want to detect forgeries,” said Burgess, “you can tune your sensor to be acutely sensitive to one specific formulation, and then anything that’s different stands out, regardless of the composition.”

One immediate application would allow authorities to verify the fuel grade of gasoline right at the pump. Burgess also envisions creating a chip that tests bootleg liquor for toxic levels of methanol.

The W-Ink technology also would be useful for identifying chemical spills very quickly. A W-Ink chip that was calibrated to recognize a range of toxic substances could be used to determine, on the spot, whether the spill required special treatment.

“A device like this is not going to rival the selectivity of GC-MS [gas chromatography–mass spectrometry],” said co-principal investigator Joanna Aizenberg, the Amy Smith Berylson Professor of Materials Science at SEAS and a core faculty member of the Wyss Institute. “But the point is that if you want something in the field that requires no power, is easy to use, and gives you an instant result, then the W-Ink may be what you need.”

Burgess, Mishchenko, Hatton, Lončar, and Aizenberg were joined on the paper by co-author Mathias Kolle, a postdoctoral researcher in Aizenberg’s lab.

The “W-Ink” research was supported by grants from the Air Force Office of Scientific Research, the Natural Sciences and Engineering Research Council of Canada, and the U.S. Department of Homeland Security, administered by the Oak Ridge Institute for Science and Education.

Electron microscopy was performed at Harvard’s Center for Nanoscale Systems, part of the National Nanotechnology Infrastructure Network, which is supported by the National Science Foundation.

To view a video of the process.