What’s behind the predictably loopy gut 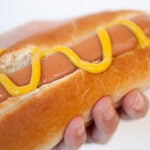 Researchers find its elastic neighbor helps in the coiling

Between conception and birth, the human gut grows more than two meters long, looping and coiling within the tiny abdomen. Within a given species, the developing vertebrate gut always loops into the same formation — however, until now, it has not been clear why.

Using a combination of experimental observations, biological and biophysical manipulations, theory, and computation, researchers at Harvard have shown that a “simple” balance of forces determines the form of the gut.

The finding may shed light on how the gut has been able to evolve to accommodate changes in diet.

The interdisciplinary research, published in the Aug. 4 issue of Nature, demonstrates that differences in growth rates between the gut tube and the neighboring mesenteric tissue force the tube to coil, regardless of the space constraints.

“One might think that the gut tube coils because it is restricted by the size of the abdominal cavity. That’s actually not the case,” says co-author Thierry Savin, a postdoctoral research associate at Harvard’s School of Engineering and Applied Sciences (SEAS). “The gut coils because when the mesentery and the gut tube grow at different rates while remaining attached, coiling is the only possible result.”

“A simple mathematical scaling theory combined with computations showed that these patterns are quantitatively predictable using experimentally derived measurements with no adjustable parameters. This allows for a study of the pattern as a function of developmental time — and even across species,” explains co-author L. Mahadevan, professor of applied mathematics at SEAS, professor of organismal and evolutionary biology and physics, and member of the Wyss and Kavli institutes at Harvard.

In a developing vertebrate embryo, the gut tube is connected along its length to an elastic sheet of tissue called the mesentery. Previous work by the group of co-author Clifford Tabin, professor of genetics at Harvard Medical School, showed that the gut has a particular handedness that is determined by the asymmetric growth of the mesentery on one side.

An initial hypothesis for the coiling of the gut proposed that similar inhomogeneous growth patterns within the mesentery or differential cell proliferation in the gut may have led to coiling.

However, an informal conversation at the origin of the collaboration with Tabin and co-author Natasza Kurpios inspired Mahadevan to propose a simpler hypothesis: that the gut grows uniformly faster relative to the mesentery.

Experiments showed that there are no nonuniformities in the cell proliferation patterns in the gut or the mesentery individually, and confirmed that the gut tube does, indeed, grow uniformly faster than the mesentery, to which it is attached.

As a result of this differential growth, the mesentery stretches, while the gut is compressed. When the elastic forces build up to a certain point, the gut tube buckles and coils.

The Harvard team also demonstrated that the weblike mesentery is integral to the shape of the developing gut. Kurpios and co-author Amy Shyer showed, through surgical manipulations, that removing the mesentery from an early-stage embryo in ovo prevented loops from forming, and removing it from a late-stage embryo caused the looping structure to relax.

These manipulations confirmed that while the gut tube and the mesentery lengthen at constant speeds, the difference in growth rate between the two attached tissues creates the opposing forces necessary for coiling.

To express this quantitatively, the researchers built a physical model of the process by sewing a silicone tube to the edge of a stretched sheet of latex — which simulated the gut-mesentery composite — and built mathematical and computational models of the coiling process.

“As experimentalists, we wanted to test these ideas by altering the properties of the tissues in developing embryos and seeing if the gut coiling changes in predicted ways,” says Tabin. “While we do not know how to change the relative growth rates of the gut tissues or alter their elastic properties in chickens, fortunately, nature has done the experiment for us. Animals that have evolved to take advantage of very different diets have strikingly different gut structures.”

The researchers examined chicks, quails, zebra finches, and mice, and found in each case that the shape of the gut at any stage can be predicted quantitatively, based on the geometry, the relative growth rates, and the mechanical properties of the tissues.

The finding suggests that changing just the relative growth rate can alter the packing of a long tube in a reproducible way, suggesting a mechanism by which the gut may have been able to evolve to accommodate changes in diet.

Patricia Florescu ’11, who was an undergraduate at Harvard College, and Haiyi Liang, who was a postdoctoral fellow in Mahadevan’s lab at SEAS, were also co-authors on the paper.