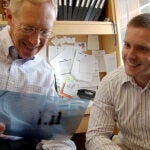 In health care, more choice may not always lead to better choices, particularly for the elderly.

In a new study, researchers from Harvard Medical School’s Department of Health Care Policy found that the large variety of managed care plans offered by the Medicare Advantage program may be counterproductive. Elderly patients, particularly those with low cognitive ability, often make poor decisions — or no decisions at all — when faced with an overwhelming number of complex insurance choices.

“We are providing the most complex insurance choices to the very population that is least equipped to make these high-stakes decisions,” says J. Michael McWilliams, assistant professor of health care policy and medicine at Harvard Medical School and a practicing general internist in the Division of General Medicine at Brigham and Women’s Hospital. “Most other Americans choose from just a few health plans, but elderly Medicare beneficiaries often have to sift through dozens of options.”

The Medicare Modernization Act of 2003 initiated a series of payment increases to the Medicare Advantage program. These payment hikes dramatically increased the number of private plans participating in the program and encouraged plans to compete for enrollees by offering lower premiums and more generous benefits, such as prescription drug coverage.

The researchers found that, on average, an increase in the number of plans was associated with increased Medicare Advantage enrollment, provided the number of available plan options was fewer than 15. When the number of options surpassed 30, as it did in 25 percent of U.S. counties, such increases were actually associated with decreased enrollment. More importantly, beneficiaries with low cognitive function were substantially less likely than their peers with high cognitive function to appreciate the advantages offered by these plans, choosing to remain in the traditional Medicare program instead.

The authors suggest the reason for lower enrollment could be that beneficiaries became overwhelmed and chose traditional Medicare by default. Furthermore, elderly Medicare beneficiaries with limited cognitive abilities may have difficulty identifying the most valuable option from a complex set of Medicare alternatives. This is particularly concerning given the high and rising prevalence of cognitive impairment and dementia in the aging Medicare population.

The findings also have important policy implications as health insurance exchanges are established under the recent national health reform legislation, the Affordable Care Act. These exchanges, the authors say, could be helpful to senior citizens and the Medicare program if expanded to handle enrollment in Medicare Advantage plans.

“Efforts to limit choice and guide seniors to the most valuable options could especially benefit those with cognitive impairments, who without more help appear to be leaving money on the table,” McWilliams said. “Better enrollment decisions could in turn strengthen competition by rewarding high-value plans with more enrollees.”

The research was funded by the Beeson Career Development Awards in Aging Research Program, National Institute on Aging, and American Federation for Aging Research.