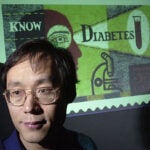 Research points to advantages for cells that stick together

Harvard researchers studying the same yeast used in beer brewing and bread making have gained new insights into one of the key steps between life’s earliest beginning and the development of complex animals like humans: the rise of multicellular life.

A team of researchers led by Andrew Murray, the Herchel Smith Professor of Molecular Genetics, found that yeast cells that clumped together were able to more effectively manipulate and absorb sugars in their environment than were similar cells that lived singly. The experiments showed that in environments where the yeast’s sugar food source is dilute and the number of cells is small, the ability to clump together allowed cells that otherwise would have remained hungry and static to grow and divide.

Murray said the work offers one explanation as to why single-celled organisms might have initially banded together deep in the history of life, though it’s impossible to prove conclusively that this is what happened.

“Because there is an advantage to sticking together under these circumstances, and because we know that lots of single-celled organisms make enzymes to liberate goods from their environment, this may be the evolutionary force that led to multicellularity,” Murray said. “Short of inventing time travel and going back several billion years to see if this is how it happened … this is going to remain speculation.”

The work, which appears in the Aug. 9 issue of the journal PLoS Biology, was conducted by a team including Murray, postdoctoral fellow John Koschwanez, and Bauer Fellow Kevin Foster.

Common yeast, Saccharomyces cerevisiae, has long been used by scientists as a model organism for understanding single-celled life. Murray’s lab has been using yeast to examine the transmission of genetic information during cell division and the question of how cells respond to selective pressure.

It is selective pressure, the driving force of evolution, at work in the most recent yeast experiments. Some mutations let yeast cells grow and divide more readily, giving them a better chance to pass their genes to subsequent generations and dominate the population. Murray and colleagues’ work shows that under certain conditions, working together gives yeast cells an advantage over those that go it alone.

But first, the yeast needed work to do. Murray and colleagues devised a series of experiments that presented two problems for the yeast cells to solve if they were to take in enough food to grow and divide. The first was how to change their food from an unusable form to a usable form. The second was how to actually take in this food.

The researchers put the yeast in a solution of sucrose, or plain old table sugar, which is composed of two simpler sugars, glucose and fructose. Yeast lives on sugar, but the sucrose can’t get through the membrane that surrounds the cell. So the yeast makes an enzyme called invertase to chop the sucrose into glucose and fructose, each of which can enter the cell using gatekeeping molecules, called transporters, that form part of the membrane.

The second problem is how to get the glucose and fructose from the place where they were split apart by invertase to the transporters in the cell membrane. The only way to bridge the gap is through diffusion, an inefficient process. Researchers calculated that once a cell makes invertase and chops the larger sugar down to usable bits, only one sugar molecule in 100 would be captured by the cell that made it.

They also calculated that, working alone, a single yeast cell in a dilute solution of sucrose would never take in enough glucose and fructose to be able to grow and divide. But by cooperating, clumps of yeast in that same solution might have a chance. With several cells in proximity, all releasing invertase to create smaller sugars, they would increase the density of those sugars near the clump, increasing the chances that each cell could take in enough to grow and divide.

“The bigger the clump, the faster everyone gets to take up glucose and fructose,” Murray said.

To test this idea, the researchers used two strains of yeast. The first was the common laboratory strain, which tends to reproduce by cleanly dividing and forming separate individuals in subsequent generations. The second strain, more commonly found in nature, tends to clump together after dividing.

After putting cells from the two strains in dilute solutions of sucrose and letting them incubate for some time, researchers found that indeed, the clumping strains were growing and dividing while the yeast cells living alone were not.

“Based on the results, there is an advantage to sticking together,” Murray said.

The research, Murray said, has led to further investigations, ongoing now, on whether selective pressure would allow researchers to effectively evolve clumping yeast from those that live singly. Murray said results were preliminary, but promising.

“It is proof of concept,” Murray said. “It could have happened this way. That’s not to say it did happen this way.”