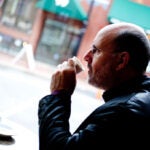 Of the bean I sing

J.K. Rowling’s world of Harry Potter comes alive every morning when the Harvard Museum of Natural History (HMNH) opens it doors. Since July 9, Harry Potter aficionados and ambivalent readers alike have flocked to the museum to complete the “Harry Potter Scavenger Hunt.”

To begin the scavenger hunt is simple: Pick up a “Marauder’s Map” when you enter the museum and follow its clues. The map lists items such as Harry’s “invisibility cloak,” “animagus,” and “Snape’s Patronus,” offering hints about a related item in a specified area of the museum. The map is available free with admission and museum-goers have until Sept. 5 to participate. Not just for kids, the search for Harry Potter treasures has attracted eager groups of all ages.

The educational goal of the scavenger hunt is to bring attention to the real plants and animals that may have inspired characters, creatures, and objects in the Potter books. For example, Dobby the house elf’s counterpart is an aye-aye monkey, a real-life primate with large eyes and ears.

“J.K. Rowling clearly drew on some knowledge of natural and human history,” said Janis Sacco, the HMNH director of exhibitions, who points out Rowling’s use of wolfsbane potion in the novels to render werewolf Remus Lupin harmless during the full moon. A beautiful life-size glass model of the plant wolfsbane is displayed in the Glass Flowers exhibit at the museum.

The thestral, described in the books as a skeletal, carnivorous creature with leathery wings, appears to resemble the fossil skeleton of a Cenozoic precursor to today’s horses, Equus.

On each label, museum staff provide both a basic summary of the similarity between the magical and muggle specimens and a suggestion for Harry Potter experts to find related objects based on their knowledge of the series.

The scavenger hunt was designed to be “as versatile as possible” in terms of its audience, making it challenging for people of varying familiarity with Harry Potter’s world, explained Sacco. It engages visitors to the HMNH exhibits in a new way, by helping them to understand what inspired Rowling’s world, and what aspects of the mythological world exist in our own world.

“Sometimes the real world is even more magical than the magical world,” she added.

The “Harry Potter Scavenger Hunt” continues through Sept. 5 during regular museum hours, 9 a.m.-5 p.m. It is free with museum admission. For more information, visit the website.