A portrait of change 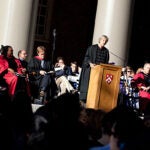 Perched high on the wall in the Braun Room at Harvard Divinity School’s (HDS) Andover Hall is the newest member of an esteemed club that is diversifying Harvard with each passing year.

Just above the portrait of the Rev. Francis Parkman, the prominent 19th-century theologian for whom the Parkman Professor of Divinity is named, hangs a new painting of Preston N. Williams, Houghton Research Professor of Theology and Contemporary Change Emeritus.

“The Braun room [pronounced Brown] up until today was very white,” said Harvey Cox, Hollis Research Professor of Divinity Emeritus, who lauded Williams for his four decades of service to Harvard during an unveiling ceremony on Tuesday.

The artist is Stephen Coit ’71, who has painted numerous Harvard figures. The work is the product of the Harvard Foundation’s Portraiture Project, whose goal is to reflect the diversity of individuals who have served Harvard for at least a quarter century, including (but not limited to) persons of African-American, Asian-American, Latino American, and Native American backgrounds.

Professor S. Allen Counter, director of the Harvard Foundation, coordinates the committee, the members of which are Harvard College students and faculty.

In the background of Williams’ portrait is one of Parkman, dressed in black robes and a high, white collar with his hand resting on a crimson book.

Coit said he was inspired to include Parkman in the backdrop in part because he was “known for his kindness, his tolerance, his generosity. And he had a uniform benevolence and kind feelings with which he regarded all around him.”

“I think there are things these men share, and things they don’t share,” said Coit, referencing their similar natures but the vastly different times in which they lived.

“I think Rev. Parkman could not have conceived of this day and this portrait. It’s a different world. And yet I think he would have been absolutely thrilled, because the portrait above represents the change in the religious community, the change in what challenges [we face], the changes in the nation, and changes at Harvard.”

During the ceremony, David Evans, a Harvard senior admissions officer whose own portrait, also painted by Coit, hangs in Lamont Library, paid tribute to Williams, calling him a “worthy and honorable man,” and remarking on Williams’ efforts to engage with the broader Harvard community throughout his career.

“He extended himself to students at the undergraduate level and otherwise, and we are the better for it,” said Evans.

Williams was acting dean of HDS from 1974 to 1975, and the acting and first director of Harvard’s W.E.B. Du Bois Institute for African and African American Research. From 1998 to 2008, he was director of the Summer Leadership Institute, a program that has brought religious leaders from urban settings to Harvard for classes on community development.

Williams thanked the many who made the unveiling possible, noting that the day was saddened only by the absence of the Rev. Peter J. Gomes, who “played a large part in bringing about the event.” Gomes, the Plummer Professor of Christian Morals and Pusey Minister in the Memorial Church, died in February. He had chaired the Portraiture Committee.

“We are pleased to become a part of Peter’s legacy,” Williams said. “We miss him, but he will always be a part of our relationship to each other.”

Williams said he was happy that the unveiling took place so close to the public unveiling of the Martin Luther King Jr. National Memorial and the anniversary of the historic 1963 civil rights march on Washington.

Above all, Williams was thrilled that the ceremony fell on the birthday of his father, Anderson James William Sr., who was born in South Carolina in 1888.

The occasion, Williams said, called to mind his parents, who “mightily struggled under segregation and discrimination to create opportunities for their sons and their grandchildren.”

“My father and my mother … would be very appreciative of this honor bestowed upon me by the Harvard Foundation and the Harvard Divinity School.”

In keeping with the theme of diversity, speakers for the HDS convocation ceremony called for continued diversity in the ranks of professors and teachers at the School and a broadening of its fields of study.

Under a tent behind Andover Hall, students gathered for a procession of HDS scholars, who entered to Aaron Copland’s moving classical work “Fanfare for the Common Man.”

Harvard Divinity School needs to continue to push for a “multiplicity of approaches and perspectives,” said Elisabeth Schüssler Fiorenza, Krister Stendahl Professor of Divinity, who urged the School to further develop a “different critical study of religion,” one that encompasses religious traditions and scholarship from Africa, Asia, and Latin America, and geared toward a “radical equality.”