When estrogen isn’t the culprit 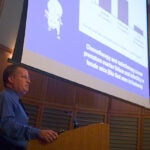 Although it sounds like a case of gender confusion on a molecular scale, the male hormone androgen spurs the growth of some breast tumors in women. In a new study, Harvard scientists at Dana-Farber Cancer Institute provide the first details of the cancer cell machinery that carries out the hormone’s relentless growth orders.

The study, to be published in the journal Cancer Cell on July 12, provides scientists with several inviting targets — cell proteins that snap into action in response to androgen — for future therapies. Drugs that block those proteins could slow or stifle tumor growth in many breast cancer patients who are not helped by standard hormone-blocking agents such as tamoxifen.

“We identified a novel subtype of breast tumor which grows in response to androgen but not estrogen, and have uncovered the signaling pathways involved in its growth. And we’ve demonstrated that drugs capable of blocking these pathways, including the receptor for androgen itself, can inhibit tumor growth,” says Harvard Medical School Professor Myles Brown, the study’s senior author. “This opens new avenues to the treatment of some women with breast cancer that doesn’t respond to standard endocrine therapies.”

About 70 to 75 percent of breast tumors are fueled by the female hormone estrogen. Their cells are loaded with estrogen receptors (ER), traplike structures specially shaped to ensnare estrogen molecules. When estrogen becomes lodged in an estrogen receptor, it sets off a chain of events that prompts the cell to grow and proliferate. Drugs such as tamoxifen block estrogen from entering the receptor, thereby thwarting the growth process.

The remaining 25 to 30 percent of breast cancers, dubbed ER-negative tumors, lack estrogen receptors, and thus do not respond to tamoxifen and similar agents. Scientists know that the majority of breast tumors — even those with estrogen receptors — have receptors for androgen, but the reasons for these receptors’ presence, and how they might influence tumor growth, have been unknown.

It might seem odd that some women’s breast cancers carry receptors for a hormone associated with males, but androgen is also involved in the normal development of secondary sexual characteristics in females, Brown remarks. Scientists have theorized that androgen propels the growth of breast cancer cells that have receptors for androgen but not for estrogen. The current study set out to find if that is the case and, if so, why.

Using published data on the genomic make-up of breast tumor cells, Brown and his colleagues found a distinctive group — accounting for 5 to 10 percent of all breast cancer patients — that had large numbers of androgen receptors, no ERs, and an oversupply of a protein called HER2. Cells of this type proliferated rapidly when exposed to androgen.

To understand the mechanism behind this growth, investigators did a mass screening of these tumor cells’ genetic material to see which sections of DNA bind to the androgen receptor — an indication of which genes the receptor directly switches on and off. By combining these findings with a survey of all the genes active within these cells, the researchers found that the androgen receptor governs two “transmission lines” — or pathways — for growth signals. The pathways, named for important proteins within them (WNT and HER2), play central roles in cell division and proliferation.

When researchers used drugs to handcuff the androgen receptor or the WNT or HER2 proteins in ER-negative breast cancer cells, tumor growth slowed — both in laboratory cell cultures and in mice grafted with the cells.

“These findings are strong evidence that therapies that shut down proteins in the WNT or HER2 pathways, or block the androgen receptor itself, can be effective anti-tumor agents for women with this variety of breast cancer,” Brown says. “Combination therapies that target proteins at different points in the pathways are likely to have the greatest success.”

The study involved a close collaboration between Brown’s lab and the computation biology group at Dana-Farber headed by X. Shirley Liu, an associate professor of biostatistics at Harvard School of Public Health. Brown and Liu recently founded the Dana-Farber Center for Functional Cancer Epigenetics in order to make the genomic and computational approaches used in this study more widely available to the scientific community.

The co-first authors of the study are Min Ni and Yiwen Chen of Dana-Farber. Co-authors include Elgene Lim, Shannon Bailey, and Yuuki Imai of Dana-Farber; and Hallie Wimberly and David Rimm of Yale University School of Medicine.

The study was supported by grants from the National Cancer Institute, National Institutes of Health, and Department of Defense