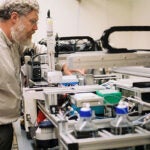 Harvard researchers at Dana-Farber Cancer Institute (DFCI) have found a way that may enable them to predict whether human melanoma tumors are likely to spread.

The scientists report in the July 12 edition of the journal Cancer Cell that they have identified a number of cancer genes that endow the tumor with the ability to metastasize and in testing in melanoma skin cancer, they found six abnormal genes that are both cancer-causing and metastasis-promoting. And one of those genes, ACP5, can be used to predict whether human melanoma tumors are likely to spread.

“Early-stage melanomas are often cured by surgical removal, but in about 10 percent of patients who undergo surgery and are considered cancer-free, the disease recurs in metastatic form and becomes fatal,” says the paper’s senior author, Lynda Chin, a Harvard Medical School professor of dermatology at DFCI and Brigham and Women’s Hospital. “The goal of this study was to see if we could find genetic events within the tumor cells that indicate which patients are at high risk for metastasis.”

The discovery of six genes capable of conferring metastatic ability on melanoma cells “is an important step toward developing prognostic tests for identifying early-stage tumors that are likely to spread and can be treated accordingly,” adds Chin.

To become metastatic and live in foreign regions of the body, tumor cells need to acquire a unique set of survival skills: they must break free of their normal moorings, enter the bloodstream or lymph system, exit through blood or lymphatic vessels, trespass on distant tissue, grow, multiply, and attract a blood supply. Each of these abilities comes courtesy of changes in genes or the system that switches genes on and off.

Traditionally, scientists have thought that cancer cells acquire their malignant potential gradually, as genetic errors accumulate over time: first gaining the ability to divide without cessation, then failing to die on schedule, then becoming able to flake off from their neighbors, etc. This paradigm has been overturned by recent studies led by Chin, which make it clear that some cells gain the genetic elements of metastasis early in their evolution.  Such tumors would, in a sense, be fated to become metastatic. Scientists who knew which genes confer metastatic power could read the tumor’s future at an early stage, enabling doctors to cure the disease by intervening early.

From that list, they set out to identify which genes actually participate in the metastatic process, the so-called “driver” genes. In particular, they screened for genes that enable tumor cells to invade adjacent tissue, since one of the first things a melanoma cell must do on its metastatic journey is burrow downward from the skin where it forms to reach the underlying tissue.

The screening yielded 11 genes that had a direct influence on the cells’ ability to invade. Because experimental models do not always reflect what happens in actual patients, researchers next probed the activity of these genes in samples of human melanomas. For six of them, they found that an increase in activity was linked to a cell’s identity as malignant and metastatic.

“We found that all six of these abnormal genes are oncogenic, that is, they can transform normal melanocyte skin cells into cancerous melanoma cells,” Chin says. “Moreover, patients whose melanoma is driven by these six oncogenes are likely to have metastases.”

To see whether the genes can serve as biomarkers, signs of a melanoma tumor’s likelihood of spreading, researchers conducted in-depth studies on one of them, ACP5. In a series of experiments with laboratory cell lines and human melanomas grafted onto mice, they found that tumors with hyperactive ACP5 were far more likely to metastasize than were tumors to which the gene was normal.

The study points toward the existence of reliable biomarkers for determining a tumor’s probability of becoming metastatic, even at an early stage of the tumor’s development, the authors state. “We’ve shown that these genes are not just loosely correlated with metastatic activity in melanoma, but play a functional role in causing cells to become and remain metastatic,” Chin remarks. Such genes are valuable not only for prognostic tests, which indicate the likely course of a disease, but also as targets for therapies that can disrupt the metastatic process in cancer cells.

Much work remains before the discoveries reported in the new study can be translated into a clinic-ready test for assessing the metastatic potential of melanomas, Chin adds, but it represents a key step in that direction.